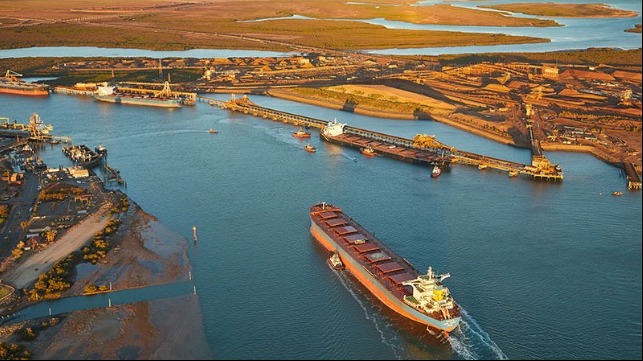 For the second time in weeks, health authorities in Western Australia are dealing with an outbreak of the coronavirus aboard bulkers calling at Port Hedland in Northwest Australia. The port plays a vital role in Australia’s ore industry.

The Department of Health confirmed that a crew member of the ore carrier Vega Dream was transferred to a shoreside health facility on the night of October 10 and was showing as positive in a rapid test for COVID-19. Follow-up testing confirmed that the seafarer, a man in his 30s, was positive for the virus and the decision was made to transfer him to a quarantine facility in Perth, Australia.

Fearing potential implications from the test, as a precaution, the State Health Incident Coordination Centre declared a new outbreak. However, it was reported that only the pilot and a cargo surveyor had boarded the ship and both were wearing protective equipment and maintained socially distant at the time. The pilot however is being held in quarantine as a further precaution.

The 175,000 dwt Vega Dream, with a total crew of 20 onboard, was fully loaded with iron ore and ordered to depart the port mid-day on October 11. The ship anchored outside the port, where further testing produced six additional positive results among the crew. The health authorities said that the crew as being quarantined aboard ship and noted that because of the modern nature of the vessel each crew member had a private cabin that facilitated the quarantine.

Mitsui O.S.K. Lines (MOL), which owns and operates the Vega Dream, issued a statement confirming the seven positive tests among the crew while noting that the other thirteen crew members, are showing no symptoms of COVID-19, and have tested negative. Among the seven crew members that have tested positive, MOL reports that one had boarded on August 13, and six boarded on September 24, which was the latest crew change for the vessel. All crew members boarded in compliance with the Department of Transportation in the Philippines, Protocol for Crew Change and Repatriation, as well as being quarantined and tested negative in the Philippines before joining the vessel.

Because the vessel is now outside the port, it is not under the authority of the local officials. They however are continuing to monitor the situation and work with the commonwealth. They are also expressing concern because it is the second instance of the virus aboard a vessel in the port.

Health Minister Roger Cook told Australian media that he had been in touch with the mining companies. He expressed his concern and reported the mining companies were going to reconsider the use of crews coming from Manila because of the current situation. Manila is one of the ports that has been facilitating crew changes through dedicated lanes and policies for seafarers.

In late September, the Port of Hedland had a more widespread outbreak among the crew of the bulk carrier Patricia Oldendorff. At the time. 80 percent of the crew of the bulker tested positive for the virus. To maintain order members of the Australia security force were dispatched to the town while the crew was placed i quarantine in a local hotel.

The Western Australia health authorities reported on October 10 that 18 of the 21 crew members from the Patricia Oldendorff had recovered from the virus and that 12 of them that had been held in quarantine onshore were transferred back to the ship. Three other crew members were being sent to Perth, Australia for a further quarantine before their onward journey which was being arranged by the local shipping agent.

The Patricia Oldendorff was also cleared by local authorities to resume service. The vessel departed Australia on October 11 bound for Indonesia.