MOL And Vale To Study Rotor Sails For Large Bulkers 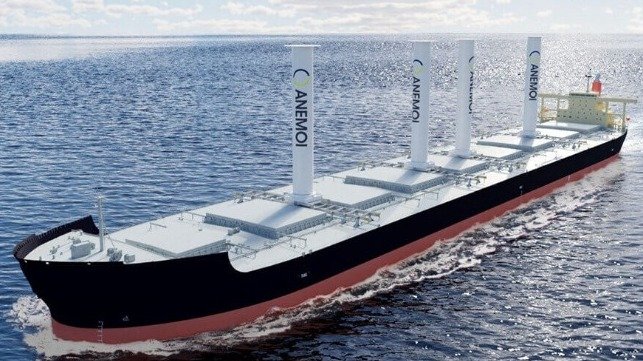 Mining giant Vale International and Japan’s Mitsui O.S.K. Lines are teaming up for a new joint study on the use of wind propulsion systems employing rotor sails on large bulk carriers. The new study is the next step for Vale which earlier this year began testing both rotor sails and air lubrication on its large ore carriers as a means of improving performance and reducing greenhouse gas emissions.

MOL explains that the rotor sail produces propulsive force as the wind generates differential pressure around the slewing rotor while the vessel is underway. They believe that it offers high efficiency because the natural energy of the wind directly propels the vessel rather than being converted in to electricity.

In May 2021, one of the new 325,000 dwt ore carriers chartered to Vale was fitted with five rotors as a pilot project. Vale and vessel owner Pan Ocean Ship Management are working with another manufacturer, Norsepower, on this trial. Norsepower said that it was their first installation of rotors on a bulker and one of the first times they have been tested on a vessel of that size.

Norsepower recently estimated that many as 30,000 ships in operation currently could be equipped with wind-assisted propulsion technology. Rotors are one of the leading technologies in the area, although shipping companies are also studying the use of sails and a wind-kite concept.

MOL has been working on developing other wind propulsion technology including its Wind Challenger, a rigid sail. The Japanese shipping company plans to deploy its first Wind Challenger systems in 2022. MOL is also working with Indian steel company Tata Steel to develop an environment-friendly bulk carrier to transport raw materials to the steel mills.