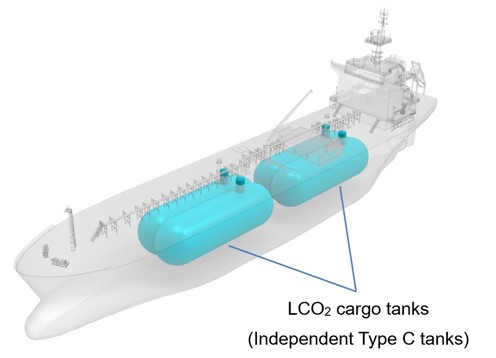 Japan’s shipbuilding company Mitsubishi Shipbuilding has obtained approval in principle (AiP) from the classification society Bureau Veritas for a cargo tank system to be mounted in a liquefied CO2 (LCO2) carrier.

Mitsubishi Shipbuilding is actively pursuing the commercialization of LCO2 carriers. Recently, the company has teamed up with French energy major TotalEnergies to carry out a feasibility study for the development of LCO2 carrier.

Accordingly, independent Type C tanks as defined by the IGC Code are typically used for the cargo tank system. A structural design based on standards for pressure containers is required when using a Type C tank.

There are various structural types for these tanks, including cylindrical, bilobed, and trilobed. A further important factor is to select a steel material for the LCO2 tanks with high strength and low-temperature properties.

“The carbon dioxide capture, utilization, and storage (CCUS) is attracting attention worldwide as an effective means to achieve decarbonization. LCO2 carriers play a pivotal role in transporting CO2 from its emission sources to storage sites or facilities for utilization, and demand for these vessels is expected to increase in the future,” according to Mitsubishi Shipbuilding.

The company revealed that it is responding to this demand by actively pursuing the development and commercialization of LCO2 carriers.

Mitsubishi Shipbuilding previously conducted studies on CO2 carriers in 2004 as a participant in the International Energy Agency (IEA)’s Greenhouse research and development program.

“Going forward, with this acquisition of an AIP for the LCO2 cargo tank system, MHI Group will continue to develop and offer a wide range of technologies related to the LCO2 carriers essential to building a CCUS value chain, and contribute to the realization of a decarbonized society,” the shipping firm concluded.