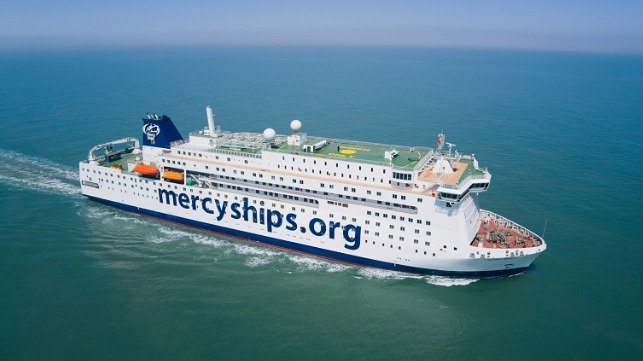 Since its inception in 1978, Mercy Ships has provided free medical aid plus physical and moral support for people in countries ranked in the lower third of the World Health Organization’s Human Development Index. The organization has shown unwavering determination in its quest to eradicate diseases of poverty.

For the most part, such diseases should be relatively straightforward to prevent or treat, but the World Health Organization has estimated that over 50 percent of the population in the poorest parts of Africa and Asia lack regular access to essential medicines and healthcare. With only around half of sub-Saharan African children vaccinated against childhood diseases, many die from preventable diseases such as diarrhea, measles, malaria and malnutrition-related causes. The work carried out by Mercy Ships could not be more vital.

The pandemic has been a devastating setback – a global catastrophe that has only served to make extreme situations even more disastrous. However, last year’s challenges have only strengthened Mercy Ships’ resolve, and Intellian Technologies is with them every step of the way.

Beginning in 2019, Mercy Ships successfully utilized an Intellian v240C C-band VSAT solution on board its hospital ship Africa Mercy. This has now been updated to an Intellian v240M 2 dual-band, multi-orbit VSAT system using a connectivity solution from SES, “which has been our provider of choice in scoping out the antennas for Global Mercy, the new vessel coming out of China,” says Jonathan Dyson, Director of Enterprise Infrastructure at Mercy Ships.

“We wanted to future-proof our installation. Historically, we had the antenna as a lease from another provider, so now that we’re moving forward and purpose-building our ship, we decided that we wanted to own our antennas and switched providers,” he said. “If we need to upgrade, downgrade, switch from GEO to MEO or even LEO constellations, we can do that with SES because of the antennas that Intellian has provided.”

Global Mercy, Mercy Ships’ new vessel, is the largest civilian hospital ship in the world. It can accommodate up to 950 people in port, including 641 volunteer crew members, and its six operating theaters and hospital wards are designed to manage 200 patients at a time. The company estimates that it will more than double Mercy Ships’ current surgical and training capacity. By the time the vessel has seen out its anticipated 50-year working lifespan, more than 150,000 lives will have been improved and saved by the surgeries carried out on its purpose-built hospital decks.

Global Mercy completed its deep-water sea trials in May 2021, during which exhaustive tests were carried out to ensure that engine performance, manoeuvrability and fuel consumption are all on target. Safety evaluations were also conducted, as were a series of tests to confirm that all onboard equipment and systems are fully operational, in advance of the vessel entering service in sub-Saharan Africa next year.

Global Mercy is fitted with dual 2.4m Intellian v240MT 2 antennas, integrated and controlled by Intellian’s Intelligent Mediators, which guarantees seamless connectivity by switching between antennas should the vessel’s superstructure ever block a satellite signal. Installation of the antennas was completed just a few weeks ago, and it was a concerted team effort that overcame several logistical and circumstantial difficulties, as Dyson recalls.

“Intellian and SES collaborated to get all the hardware installed and take it out on the last sea trial to make sure that it was working. It was good to have all these teams working together positively and get that accomplished,” he said.

Mercy Ships’ increased investment in Intellian hardware – upgrading the system on Africa Mercy and installing a top-of-the-range, orbit-agnostic v240MT 2 dual-antenna solution on Global Mercy – directly reflects the company’s operational growth and the changing landscape of connectivity, according to Dave Shwadlenak, VP of IT at Mercy Ships.

“As Mercy Ships has matured more and more, we’ve had an increased need not to have on-premise servers and applications, and that’s driving a lot of what we do technology-wise. Our technology stack has become so broad, and so much is in the cloud these days, that having data centers on board the ships is problematic for us,” said Shwadlenak. “So, one of the reasons for the upgrade and moving towards more bandwidth is the ability to communicate dynamically and immediately with our ships. We transfer a lot of data back and forth: many of our applications are in the cloud, so it’s essential to be able to access this. In most countries, we can get shore connections, but the satellite is our lifeblood. It is our mainstay, the one thing upon which we constantly rely.”

“The work we do in the hospital, and for that matter everything that we do aboard, is centralized here at the ISC. Most of our servers are here or in the cloud, so this communication piece has become critical for us: and it’s only because we’ve been able to upgrade that bandwidth that we’re able to move to that technology,” he added. “It was just a couple of years ago, when I joined, that we had a 3MHz pipe with the satellite. It was impossible to do some of the things we’re doing today.”

Global Mercy is due to deploy to Sub-Saharan Africa – Madagascar, Cameroon, Guinea, Senegal, and Benin – in 2022. In addition to the vital medical support and reinforcement it will bring to these areas, it will also host mentoring and training programs for local health professionals.

Satellite connectivity is at the heart of Mercy Ships’ work. It enables the smooth running of the day-to-day business, including essential communications with the sponsors and donors whose input is key to Mercy Ships’ ongoing ambitions. It also allows teleconferencing applications for capacity building and remote training; image sharing; diagnostic discussions with specialists located worldwide; and all-important crew welfare connectivity for social media access and web browsing.

Dave Shwadlenak is under no illusions about the potentially disastrous effects upon the company’s capabilities were its connectivity to go down. “It could be catastrophic, in all honesty. We could still operate, but only for a short time. For example, staff turnover is all centralized back here at the ISC, so we would be forced to go back to some paper environment where we’re trying to keep up with room registrations and so forth. Our finance department would have difficulty, while the ability for trainees to remotely watch surgeries and learn from that would be unavailable as well. So much of our work would be greatly diminished or cease altogether.”

Both Dave Shwadlenak and Jonathan Dyson are unstinting in their praise for Intellian. “I’ve been very, very happy with them,” Shwadlenak emphasizes. “Frankly, they’ve been marvelous in terms of working with us and helping us through many of the pitfalls we had. Especially in China, it was tremendous what they did there.”

“We basically needed letters of permission from the Chinese Ministry of Foreign Affairs,” Dyson explains, “but travel restrictions meant that it was suddenly going to be a major problem to get people onsite for the installations. Intellian and SES worked really well together to come up with a plan. It was very much outside of process, but from a customer service perspective, it was great to just be able to lean on them and have a team from Shanghai who came down to build the system, to put everything together and check it, and make sure that all the hardware was there when we couldn’t get anybody there. That was just fantastic.”

“I’ve worked with many different service providers,” Dyson adds, “to figure out costs of bandwidth per MB per month because we need to be financially responsible towards our donors. So I’ve spoken to a broad range of vendors, and all of them recommended Intellian hardware. All of them. That speaks volumes about the quality of the equipment, the hardware, the products that Intellian provides. Through a fiscally responsible investment in Intellian products, this partnership allows us to fulfill our mission and provide quality access to safe surgeries.”

“I’ve appreciated everybody that I’ve worked with from Intellian; they’re all very professional. The partnership between SES and Intellian appears from our standpoint to be very strong, so if we reach out to SES, we know it will be handled by Intellian, and it’s transparent to us as the customer as it should be. Intellian’s customer service has been seamless from our perspective,” he concluded.