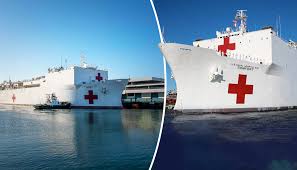 It is said that no amount of darkness can hide a spark of light, as we sailed our way through innumerable trials and tribulations this year, we witnessed frontline warriors, some in flesh and blood with a white cape and few others in hull and anchor, painted white with a red cross.

The deployment of the two United States Naval Ships, USNS Mercy and USNS Comfort during the outbreak of the novel coronavirus brought succour to the world on the brink. The two cities hardest hit in the US: Los Angeles and New York were provided assistance by these hospital ships to ease medical overloading at the time. But the journey of the ships with the same name runs farther than the imagination can reach. Throughout their histories, these ships have granted solace and medical care whenever humanity was grappling with the times of war and emergency.

The ‘war to end all wars’, ironically became the event which created the need for several US Navy Hospital Ships. In mid- 1917, a state of war between the United States and Imperial Germany led to the need for medical support, surpassing the limited capabilities of the Navy’s sole hospital ship, Solace (AH-2). Hence, on 19 July 1917 the Navy procured a passenger liner/ troop ship named SS Havana and converted it into a naval hospital ship, renamed USS Comfort (AH-3). In 1918, with the need for more medical assets afloat, the Navy purchased Saratoga, a steamer for the Ward Line, after repair and conversion was renamed as USNS Mercy (AH-4). These were the first Navy vessels to have female nurses aboard. Remarkably, the ships could accommodate 500 patients, with an operating suite, X-ray machine, and multiple laboratories.

After the war, these ships were sent to assist those infected with the Spanish Flu (H1N1)-1918. Then Mercy was transferred to the Emergency Relief Administration to be used as a shelter home during the Great Depression, it eventually became a scrap in Baltimore. Whereas Comfort (AH-3) after a long journey had to be renamed as USAHS Shamrock since a new ship named Comfort (AH-6) was already in service.

Mercy (AH-8) was newly commissioned in 1944 and then along with Comfort (AH-6) and Hope (AH-7) was deployed to deliver the patients to shore facilities, after providing primary care, during the Pacific war. After evolving into many such roles, in 1946, both the ships earned two battle stars and were decommissioned eventually.

During the Vietnam War, to support the new Rapid Deployment Joint Task Force, the Navy converted Two San Clemente-class T-8-class super tankers, SS Worth and SS Rose City, into Mercy (T-AH-19) and Comfort (T-AH-20) in 1986 and 1987 respectively. As two of the largest vessels in the US Navy, these ships had an operation crew of 70 civilian mariners and 1,200 medical personnel with facilities like CT Scanner, radiology suites, intensive care wards, each.

Later, both the ships served to treat the wounded personnel to support “Operation Desert Shield and Desert Storm”, in the course of the Gulf War, waged by coalition forces from 35 nations against Iraq in response to Iraq’s invasion and annexation of Kuwait. In 1994, Comfort (T-AH-20) was turned into a migrant processing centre during Haitian Refugee Crisis. The attack of 9/11 led to the active participation of Comfort (T-AH-20) in the Operation Noble Eagle. Fulfilling their duties, both the ships parted ways, Comfort (T-AH-20) sailed to the Gulf of Mexico in response to Hurricane Katrina (2005) and Mercy (T-AH-19) headed to Indonesia to assist in the recovery from “The 2004 Indian Ocean Earthquake and Tsunami.”

With the culmination of their previous duties, these ships were used in rotating yearly exercises. Starting from 2006, on most even years, Mercy (T-AH-19) sailed on to conduct humanitarian medical assistance missions, while Comfort (T-AH-20) did the same during odd years.

Mercy (T-AH-19) was preparing for next mission, Comfort (T-AH-20) was undergoing routine maintenance, in early 2020 when both the ships were summoned for their aid during the global pandemic. In order to assist the overcrowded regional hospitals, both the ships were expected to treat non-COVID-19 patients. From the original pair of ships that treated the victims of the Spanish Flu, to the current deployment at the time of medical emergency, the journey of these ships has come full circle and yet they never cease to serve.

Comfort and Mercy have become the symbol of recuperative care as they continue providing vital aid and humanitarian relief.