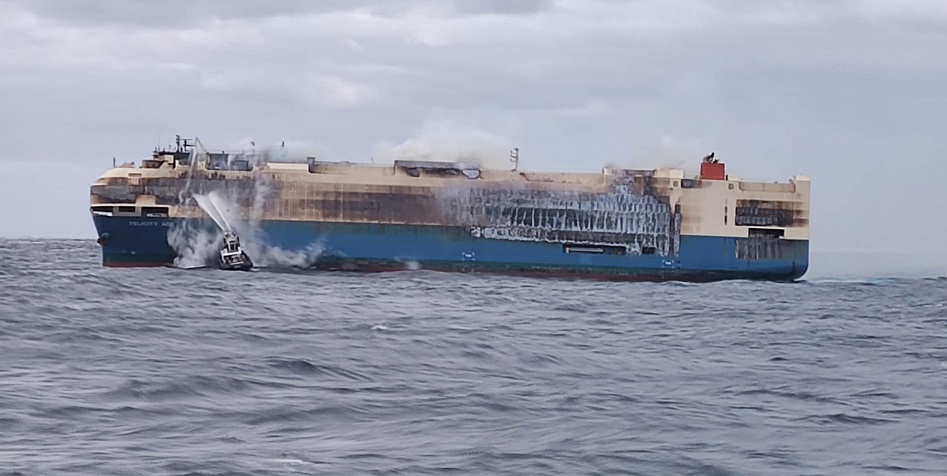 The UK’s Maritime and Coastguard Agency has published best practice guidance for the safe carriage and charging of electric vehicles on ro-ro passenger ferries.

While electric vehicle fires are no more common than fires in traditional vehicles and do not create significantly more energy, in the absence of specific International Maritime Organisation (IMO) rules the guidance has been issued to address the differences in detection and firefighting for electric vehicles.

Aside from the different firefighting requirements of electric vehicles, they are also 25% heavier on average and have a different centre of gravity which can be used to make better weight and stability calculations.

Not all vehicle fires start with the battery or fuel system, and early detection of a fire originating elsewhere in the vehicle before it escalates and spreads to the vehicle’s power source helps reduce overall risk.

“Electric vehicles are most commonly powered by high-voltage Lithium-ion (Li-Ion) batteries. Li-ion battery fires can be self-sufficient and continue to burn without access to additional oxygen, they may also continue to generate high amounts of heat following fire-extinction and are at risk of re-ignition. In hybrid vehicles the risks from both battery and hydrocarbon fires exist simultaneously,” said MCA.

A leak of clear or blue fluid from an electric vehicle could indicate damage to the battery or the battery and power unit cooling system, a sign the further action is needed.

Coolant leaks can lead to failure as thermal runaway is a risk with electric vehicles; if cooling fails to dissipate the heat generate by a battery—for instance because of a damaged cooling system—its internal temperature will continue to rise, creating a feedback loop of higher battery current and temperature.

Off-gassing of a mix of chemicals occurs immediately prior to a thermal runaway, and so those gases can be detected and used as an early warning sign, although that prospect is complicated by some of the same gases being present in conventional car exhaust gases.

“If off-gas detectors are used, it is recommended that they are used to detect gases not normally present in exhaust fumes, such as the long chain hydrocarbons and droplets of volatile organic compounds or after exhaust gases have been vented following embarkation. However, the use of off-gas detectors in early-stage thermal runaway detection is a developing area; such specialised detectors are expensive and there is not yet strong evidence for their efficacy in a ro-ro deck environment where many factors can influence the concentration of gases,” said MCA.

“Devices connected to fire hoses providing upwards spray, which could be placed under a vehicle, are an effective means of providing this direct cooling water effect. Fixed water monitors may be used to provide boundary cooling to allow firefighting teams to carry out other activities,” said MCA.

Reignition remains a risk once a fire is suppressed.

To protect crew fighting any fires, MCA recommends access to firefighting suits beyond the regulatory minimum and decontamination procedures to limit exposure to toxic and corrosive substances emitted in electric vehicle fires such as hydrogen fluoride, a substance which can seep through protective clothing.

Those identifies could be used during loading to position electric vehicles under drenchers, on weather decks, or away from dangerous goods.

The full report, including the MCA’s recommendations on ro-ro ferry electric vehicle charging provisions, can be found on the UK Government website.