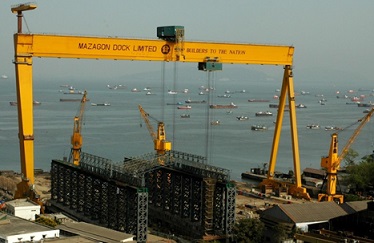 The IPO of state-owned defence firm Mazagon Dock Shipbuilders Ltd (MDL) opened for subscription. The price band for the issue has been fixed at ₹135-145 per share. Mazagon Dock Shipbuilders IPO will close for subscription on October 1. The initial public offer is for 3,05,99,017 shares through an offer for sale (OFS). The offer is expected to raise about ₹444 crore at the upper end of the price band. At the end of Day 1, the issue was two times subscribed.

The government is selling shares constituting 15.17% of Mazagon Dock Shipbuilders pre-offer paid up equity share capital in this issue. The company, which received the ‘Miniratna’ status in 2006, is the only shipyard to have built destroyers and conventional submarines for the Indian Navy. With an order book to the tune of ₹54,0470 crore, it is also one of the first shipyards to manufacture Corvettes (small warships) in the country.

UTI AMC has also come out with an IPO which will close on October 1.

New defence procurement policy 2020, is expected to accelerate indigenization, which is positive for the domestic defence industry, Geojit Financial Services said in a note.

“At the upper price band of Rs.145, Mazagon Dock Shipbuilders is available at a P/E of 6.1x which is significant discount to its peers. Considering strong technological & execution capabilities, healthy order book and attractive dividend yield, we assign a subscribe rating for this IPO,” the brokerage said.

“Mazagon Dock is a Government owned entity with a strong order book of over ₹54,074 crore and a client list with reputed names like MOD and Indian Coastal Guard. Apart from being a dominant player with high barriers to entry, Mazagon is also debt-free and enjoys a few perks due to its proximity to the coasts of Mumbai. Financially, the topline has seen decent growth however the bottomline isn’t growing at the same pace. How quickly it is able to execute orders and generate cashflows will decide Mazagon’s future growth trajectory,” she said.