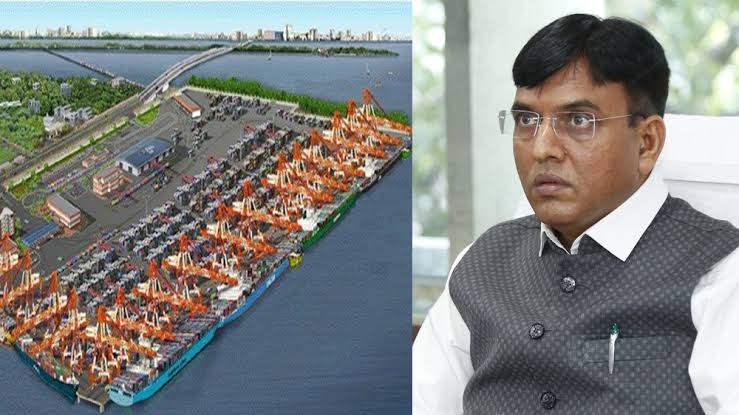 Minister of State for Shipping (I/C) Shri Mansukh Mandaviya has reviewed the development activities of Vallarpadam Terminal of Cochin Port. It is envisaged as first Trans-shipment port of India, managed by DP World.
Shri Mandaviya directed officials to chalk out the strategy to tackle the various challenges and actualize the vision of Trans-shipment Hub of India and pioneer hub in the South Asia. Shri Mandaviya said “We are developing Trans-shipment facility on Indian port to ensure that Indian cargo trans-ship through Indian Port. Resolving various issues of Vallarpadam Terminal is one of the top priority of the Ministry of Shipping.”
Trans-shipment Hub is the terminal at the port which handles containers, stores them temporarily and transfers them to other ships for the onward destination.The Kochi International Container Transshipment Terminal (ICTT), locally known as the Vallarpadam Terminal is located strategically on the Indian coastline. It successfully fulfills all the criteria which are needed to develop it as trans-shipment hub which include:
It is best positioned Indian port with regard to proximity to International sea routes;
It is located at least average nautical distance from all Indian feeder ports;
It entails a connectivity which has multiple weekly feeder connections to all ports on West & East Coast of India,
From Mundra to Kolkata;
It has proximity to key hinterland markets of India;
It has the infrastructure to manage large ships and capacity to scale it up as per requirement.
Vallarpadam Terminal of Cochin Port is proposed to be developed as most preferred gateway for South India and leading trans-shipment hub of South Asia.
Source:- Daily Shipping Times