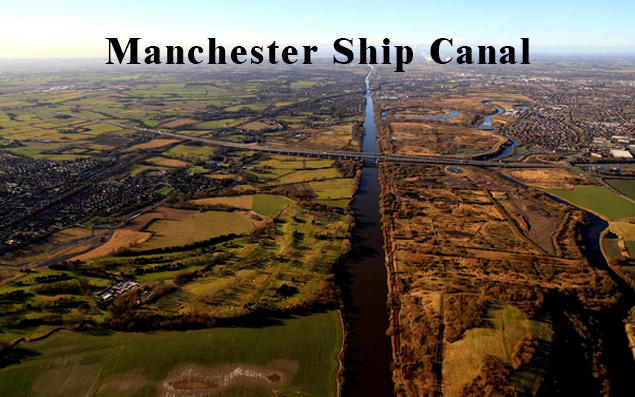 One of the most important shipping canal construction, the Manchester Ship Canal work was started in the second half of the 19th century which is also known as the ‘Late Victorian Period.’ The canal is situated in Manchester, an important regional city which is the nucleus of the largest metropolitan area in the North of England, also being the metropolitan borough. The canal was opened in 1894, being the largest river navigation canal in the world at that time.

The Liverpool port authorities increased charges for handling goods and so the Manchester businesses wanted to cut their costs. With an initiative to reduce the time and the costs associated with transporting goods by rail and road between Manchester and Liverpool, the canal turned a landlocked city into a port. With the help of this canal, it became easier for sea-going ships to move from the Mersey estuary into the central part of Manchester. The canal boosted the local economy and helped put Manchester on the map as one of the UK’s leading cities.

For most of its route, the Manchester ship canal’s navigation channel is 36.6m wide with a depth of 8.5m and works with five sets of locks along with a total length rise of 17.2m. The canal is constructed in such a way that it follows from Eastham on Merseyside through the southern edge of the estuary, passing Frodsham, flows through the River Weaver and the Weaver Navigation, and passes Runcorn. It then joins the south of Warrington and through locks near Thelwall and Irlam, continuing through Barton Locks then joining to a final lock near Salford Docks and on to Pamona Docks in Manchester.

Earlier, the Lancashire hills that surround Manchester, due to damp and moist climate, had the best conditions for processing cotton. As the cotton fibers were prevented from splitting up due to these moist conditions, it became easy for the streams and rivers to power up the water mills that ran the factories. The raw cotton extracted mainly from the American cotton fields was imported into the country. The factories situated in the south of Lancashire twisted the threads while weaving of cloths was done in the towns which were located to the north.

Later, water power alone was not sufficient anymore for the wheels of the Industrial Revolution to keep turning. For this, the third Duke of Bridgewater opened his today’s famous Bridgewater Canal (sometimes described as England’s first canal) to transport coal easily from his mines at Worsley Collieries to the industrial areas of Manchester, thus providing a cheap source of power to feed the advanced steam engines.

To provide easier access to the port of Liverpool, the Bridgewater Canal was extended, resulting to reach the River Mersey by 1776. By this, the cost of transporting raw cotton from the Liverpool port to Manchester while also the cost of shipping out the finished cloth was reduced to its half almost overnight.

Before Richard Arkwright built his first cotton mill in 1780, it was such that Manchester was taking very slow steps with the needs of the expanding British Empire, especially the huge demand of the Indian population for the “dhoti”, a cheap cotton loincloth which was used by the nation to clothe themselves. Due to the increase in the levels of production attained by the new mills, Lancashire earned the title of the “Workshop of the World” while Manchester became to be known as “Cottonopolis”.

Manchester started expanding remarkably and by the mid-1830’s it was widely recognized as the greatest industrial city in the world. In addition, Manchester’s engineering firms were diversified into general manufacturing to make machines that were required for the cotton mills. Also, substantial chemical industry was set up as the cotton mills required bleaches and dyes. Banks and insurance companies flocked to the city to provide the necessary services as the industry required financing.

Whilst the idea of linking Manchester with the sea by a navigable canal and river route, it was in 1882, that the Manchester manufacturer Daniel Adamson met with several other leaders from the Manchester business community, representatives and politicians from local Lancashire towns, and two civil engineers to form the basis of a bill that would be submitted to Parliament for approval.

Earlier, the bill failed to gain support from its neighbors and as a consequence, was rejected by Parliament. The bill was finally passed in May 1885, becoming The Manchester Ship Canal Act 1885.

Construction of the Manchester Ship Canal began in the year 1887, superintended by a Contracting Engineer, Thomas Walker. He divided the 36 miles (58 km) route into eight separate sections, appointing a Civil Engineer in charge of work for each stretch.

For the construction of the canal, the earth was dug up to a total of 41.3 million cubic meters. The project had a total number of 17,000 laborers (also known as ‘navvies’ or ‘excavators’) who worked on digging the canal. For a 10-hour working day, navvies were paid the equivalent of around £19. Thomas Walker also provided the labor force with hospital facilities, living accommodation, and meeting halls.

During construction, a variety of mechanical plant was used, including 180 locomotives, 124 steam-powered cranes and 97 steam excavators, seven earth dredgers, over 6,000 trucks, and wagons to transport the materials needed for building the canal.

Initially, the construction work was carried out smoothly, but then in November 1889, Walker died while further, due to bad weather conditions, the work faced delays resulting in serious hitches.

By early 1891, the canal company, with only half of the construction work completed, faced a financial crisis and was forced to take monetary help from the Manchester Corporation to avoid bankruptcy. In March that year, the required funds were approved and released by the Corporation, being a helping hand for the completion of the canal.

The ship canal was finally flooded in November 1893 and opened for traffic from 1st January 1894. The canal was a huge construction project with the final cost of a total of more than £15 million (1.9 billion by today’s standards), which took six years altogether. Later, it was officially opened on 21st May 1894 by Queen Victoria.

Despite being some 40 miles from the sea, the Manchester Ship Canal allowed the newly-founded Port of Manchester to establish itself as the third busiest port in Britain. In 1958, the amount of freight carried by the canal was almost 20,000,000 tons, being the highest.

Since then, the traffic on the canal has slowly declined year on year, around the 1970s and 1980s as many ships became too huge to sail through the canal.