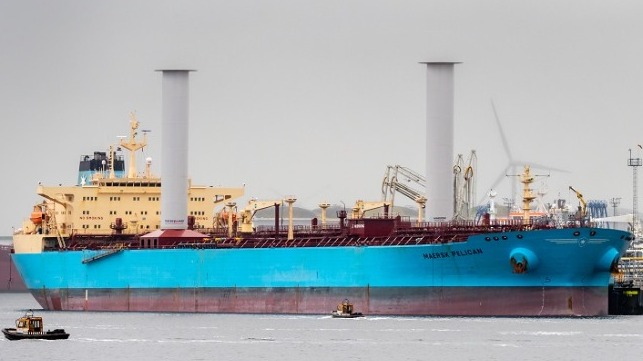 Maersk Tankers, which spearheads Maersk’s liquid bulk business, recently announced a decision to sell Maersk Pelican. Pelican was the first product tanker in the world that retrofitted wind propulsion technology into its operations.

2018 saw a pair of Norsepower Flettner rotor sails retrofitted onto the tanker for the very first time, and Maersk claimed that over a one-year test period, the vessel showed an 8.2 percent drop in fuel consumption.

Based on ship registration information, the vessel is now owned by Indonesia’s Buana Lintas Lautan (BULL), a company that has been actively picking up second-hand tanker tonnage lately. Maersk Pelican has now been renamed as Timberwolf.

“This vessel was special to us. While the vessel is sold with the technology installed onboard, we will continue to work with relevant parties to enable the use of wind propulsion technology onboard product tankers, just as we will continue to capitalize on existing and new fuel-saving solutions to help owners optimize vessel performance and cut CO2 emissions,” said Tommy Thomassen, Chief Technical Officer at Maersk Tankers.

Wind propulsion has received much interest lately for it’s cost-effective nature, as ship owners around the world aim to reduce fuel consumption and decrease their carbon footprint along the way. Depending on the size of these sails, the efficiency boosts of the propulsion assistance mechanisms are generally around 15–20 percent.