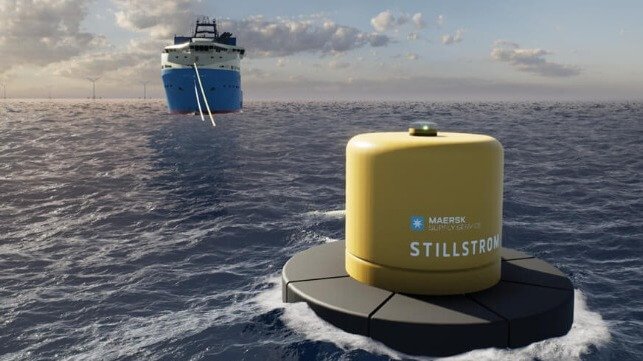 To extend the benefits of shore power to sea and support the use of batteries and electric power on ships, Maersk announced plans to launch a new company that will install offshore vessel charging stations. The first of the platforms that looks like an ordinary ocean buoy will be demonstrated later this year for vessels at an offshore wind farm operated by Ørsted.

The company to be known as Stillstrom, which will be part of Maersk Supply Services, will seek to develop and install power charging stations around the globe. Speaking to Reuters, Stillstrom manager Sebastian Klasterer said the goal is to install between three and 10 buoys at up 100 ports by 2028.

The first demonstration of the buoy will be large enough to charge a battery on an SOV vessel supporting offshore wind farms or a hybrid-electric vessel. Ørsted plans to start the testing and demonstration of the buoy in the third quarter of this year. According to the companies, it will be able to supply overnight power to one of Ørsted’s Service Operations Vessels (SOV). The companies first revealed the concept in the fall of 2020  saying their goal was to extend the benefits of shore power out to sea. Offshore wind farms are a logical first application where they can draw from the power being generated at the site.

Ørsted will be responsible for the grid integration of the charging buoy. Ørsted also intends to make publicly available any intellectual property generated during the design of the buoy’s integration into the offshore wind asset, to maximize the potential uptake of the innovation across the offshore wind sector.

Testing of the power buoy is expected to last for six to nine months. Stillstrom believes that the same solution can be scaled and adapted to supply power to larger vessels, enabling ships of all sizes to turn off their engines when lying idle. The companies explained, “Offshore charging for idle vessels is critical to facilitating the decarbonization of the maritime industry since it allows vessel owners to replace fossil fuels with electricity while being safely moored to the charging buoy.”

In addition to the applications at offshore wind farms and other offshore sites, the vision is that vessels lying at anchor outside ports could switch to the buoys similar to the use of shore power while in ports.

Stillstrom is fully owned by Maersk Supply Service and has received funding support from the Danish Maritime Fund and EUDP.