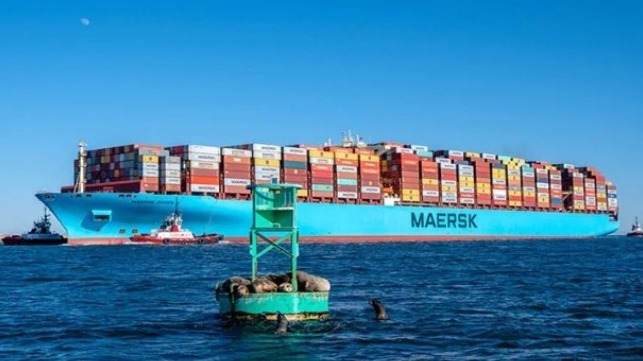 Maersk Line is reporting the second significant container loss from one of its vessels in 2021. The 13,100 TEU Maersk Eindhoven was near Japan on its regular sailing from Xiamen, China to Los Angeles, California. The line is reporting that the crew is safe as they work to assess the extent of the loss and seek a suitable port of refuge.

An 11-year-old boxship registered in Denmark, the Maersk Eindhoven experienced an engine stop in heavy seas causing the ship to be unable to maneuver and experience a severe roll. Maersk is now reported that the vessel lost 260 containers overboard during the accident. MSC issued a similar advisory to its customers saying that “preliminary advice from the vessel operator suggests that several hundred containers have been lost overboard, although we have not yet been informed whether any MSC customer cargo was impacted.”

At the time of the incident the vessel was eastbound in the Pacific having passed Japan. Propulsion was restored and according to Maersk the ship has reversed course and is expected to divert to the nearest port in Asia capable of dealing with the situation.

“We view this as a serious situation which will be investigated promptly and thoroughly,” Maersk writes in its statement. “Operations and vessel safety are our highest priority and we will be taking any necessary steps to minimize the risk of similar incidents occurring in the future. A customer communications plan and claims process were urgently put in place for those customers impacted.”

This situation comes as Maersk is still working to recover from a separate incident during which another one of its ships lost 750 containers near Hawaii during a Pacific storm. The Maersk Essen diverted to Lazaro Cardenas in Mexico where repairs to minor damage to the ship were completed as well as operations to stabilize and offload damaged containers. MSC, which also had cargo aboard the Maersk Essen reported to its customers that 350 of the containers lost were from MSC as well as 79 additional containers were damaged.

After having arrived in Mexico on January 30, the Maersk Essen today moved to the anchorage preparing to depart Mexico and resume the interrupted voyage to Los Angeles. Based on the current wait time at Los Angeles, Maersk estimates that the vessel will arrive at its terminal on March 4.

The two losses from Maersk in addition to a record loss from the ONE Apus and several smaller incidents in recent weeks are giving rise to increased discussions of the challenges and issues in container shipping. Investigations are ongoing into a perceived growing problem, while speculation is growing over issues from the increased loads and stacking practices to issues of overweight and poorly packed containers or failures of the ships to take appropriate actions when sailing into heavy weather.

Maersk says that the appropriate authorities have been advised of the latest situation and updates will be provided as additional details become available.