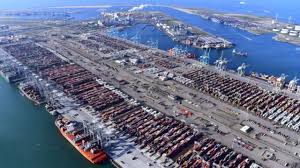 A total of nine LNG bunker vessels operate in Rotterdam’s port area, of which three can be found working there on a permanent basis. LNG is becoming increasingly popular as a transport fuel in the shipping sector. The Port of Rotterdam Authority welcomes this development. ‘Like CMA CGM, we support the transition from heavy fuel oil to liquefied natural gas (LNG) as a transport fuel for shipping. At present, LNG is the cleanest fuel that can be considered scalable and affordable for this ship category. Moreover, the introduction of these new LNG-powered vessels supports the Port Authority’s ambition to serve as a key hub in the import, export, storage and bunkering of LNG. We feel honoured that every year, these nine new ships will be bunkering some 300,000 m³ of LNG in Rotterdam. This is also good news for LNG throughput and storage activities in our port,’ says Allard Castelein, CEO of the Port Authority.

Jacques Saade is the first LNG-powered container vessel with a capacity of over 23,000-TEU containers. CMA CGM has ordered another eight of these ULCVs (Ultra Large Container Vessels) from the shipyard of Hudong-Zhonghua Shipbuilding, a full subsidiary of China State Shipbuilding Corporation. By 2022, the shipping company plans to have a fleet of no fewer than 26 LNG-powered vessels in service: nine 23,000-TEU ships, eleven 15,000-TEU ships and six 14,000-TEU ships.

This year, the port of Rotterdam has welcomed a number of other LNG-powered ships besides Jacques Saade, including a crane vessel (Sleipnir) and a cruise liner (Iona). According to the international LNG platform https://sea-lng.org, a total of 175 LNG-powered sea-going vessels were in service worldwide as of January 2020. In addition, most of the LNG bunker vessels are themselves powered by this new transport fuel. Orders for another 200 LNG-powered vessels have been placed with shipyards around the world.