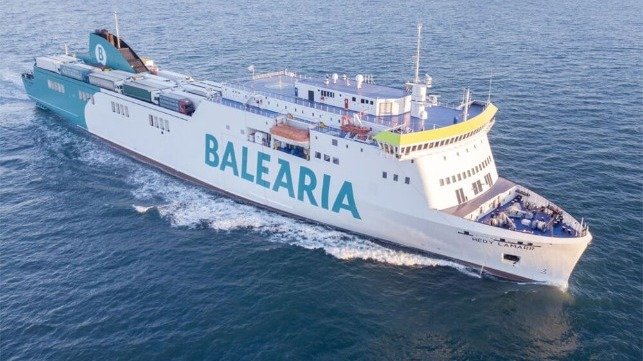 Spanish ferry operator Baleària is starting the last of the six planned overhauls of its vessels converting them to operate on LNG. When the project is completed in March 2022, the company will have invested approximately $440 million since 2018 to re-motor six vessels and build three new ferries new operating on LNG.

The last of the ferries scheduled for the conversion is the Hedy Lamarr. Built in 2010, the 610-foot vessel is notable for being a large capacity ropax with 2,860 linear meters of rolling cargo. It can accommodate up to 646 vehicles as well as 600 passengers. The ferry arrived at the West Sea shipyard in Viana do Castelo, Portugal last week to begin the five-month re-motoring operation.

During the conversion, the Hedy Lamarr’s current MAN 9L48 / 60B class engines will be adapted for dual-fuel operations. The new motors will be MAN 9L51 / 60DF class, with the capacity to run on LNG and diesel.

In addition, two natural gas storage tanks with a total capacity of 565 m3 will be installed on the ship. This will be the most complex part of the retrofit since it involves a cut in the upper deck of the ship to install the tanks. After the conversion, the ferry will have a range of more than 1,400 nautical miles while operating on gas.

Taking advantage of the retrofit operation, Baleària will also install smart ship systems on the Hedy Lamarr. Sensors will be installed on the ship to monitor fuel consumption and emissions in real-time. Passengers will also benefit from the conversion with technological improvements, including an on-demand digital entertainment platform, coverage for WhatsApp texting, and smart TVs in the cabins.

Baleària recently completed the conversion of one of its fast ferries. The company said installing new motors and automation systems significantly lowered the vessel’s fuel consumption and would extend the life of a 25-year-old vessel.