Lamprell Mulling Fire Sale In The Face Of Liquidity Crisis 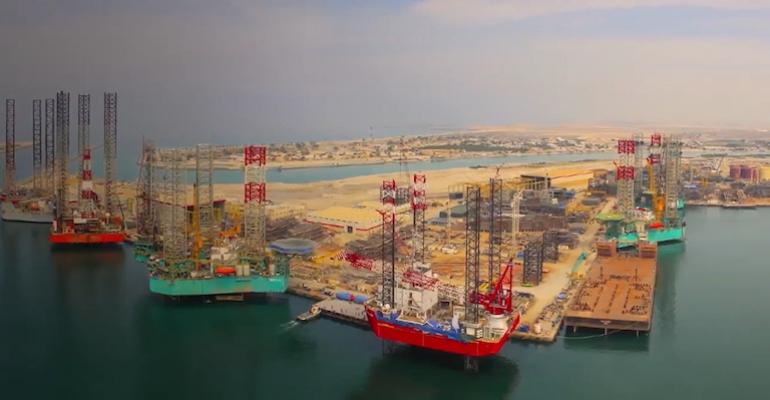 The possible sale comes only 45 days after the shipyard revealed it was in the frame for major upgrade work on three jack-up rigs set to be positioned in the Persian Gulf on behalf of an international operator.

The company announced today on the London Stock Exchange that it received ‘a non-binding indicative cash’ offer from Blofeld Investment Management, a 25% shareholder in Lamprell, to acquire the entire issued and to-be-issued share capital of the company.

Lamprell said the board was considering a possible offer in light of the group’s liquidity position and the company’s funding requirements of $75m over the next two months. “Blofeld’s proposal in respect of the possible offer is at a very significant discount to the prevailing share price and any acceptable offer would need to include an interim funding solution or bridge financing,” it said.

However, it added that the parties had been in discussions for more than two months but had not reached agreement on the price or conditions of a possible offer.

In a trading, funding and liquidity update also published today, Lamprell said its net cash position had fallen from $52.9m as at 31 December, 2021, to $8.4m yesterday, while its gross debt had increased from $19.9m to $50.0m over the same period.

Steven Lamprell, the Briton who founded the concern in 1976 in Dubai, is believed to have had a seat on the company’s board until around 2016. Reports at the time said he made around £230m ($394 million) from the company’s listing on the London Stock Exchange in 2006.

In 2017,Lamprell entered into the International Maritime Industries (IMI) jv at Ras Al Khair in Saudi Arabia with two large local and one international partner, whose medium-term goal has been to construct 20 rigs and 50 ships. Part of Lamprell‘s mandate has been to train hundreds of IMI personnel at it yard at Hamriyah Free Zone in Sharjah.

“I was surprised that they took on such a big mandate, of 25%, with IMI, because they’ve been struggling for several years and this was a huge commitment alongside giants like Bahri, Hyundai and Aramco. I didn’t know how they were going to play that, because you need very deep pockets as it’s a very long-gestation business,” Fazel Fazelbhoy, ceo, Synergy Offshore, told Seatrade Maritime News.

“They’ve had so many changes as well. The whole management structure has seen a lot of turnover, in terms of their senior executives,” he added.

“Today’s prices have not resulted in a flood of orders that they can start earning money from right away. These orders will show profitability in a year or so. Today’s oil prices are only there for the last six months. What they’ve gone through is five years or seven years of a very lean period.”

Fazelbhoy believes that the boom period that’s going to come with today’s buoyant oil prices should be enough for Lamprell to be able to attract new investors or capital.

“They are saying: ‘We’ve got this great future ahead as we have this terrific orderbook,’ but this only generates profits when the products are delivered. The money is only earned when deliveries are made. For capital goods with long delivery periods you need significant amounts of working capital. It seems clear that Lamprell was overstretched to take on such large capital commitments [as it did].

“I am absolutely sure they should be able to attract bridge finance or longer term debt. There should be enough banks in the region, when they have solid contracts with the likes of Aramco and the whole IMI franchise, plus the business from Baas Global Marine Services (BGMS). I’m amazed that Saudi banks are not stepping in and saying: ‘This is our contribution to the In-Country Total Value-Add (IKTVA) program; sure we’ll finance you.’

“Sometimes you have got to have money to make money. If you want to buy steel, and other materials, and you obtain three months credit, but you’re not getting paid in six months, you are going to get stretched. The market will only take so much. With all the supply chain issues, the price of materials has gone up dramatically.”