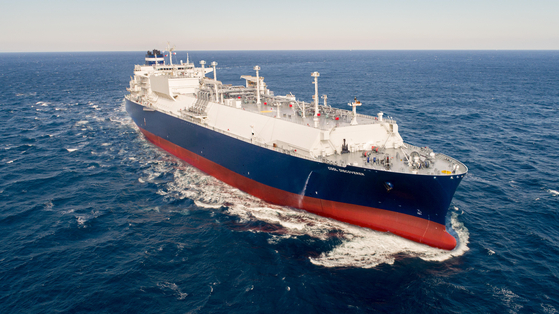 According to KSOE, a subsidiary of Hyundai Heavy Industries, an Asian shipper ordered seven 174,000-meter class LNG carriers from KSOE. The carriers will be 299 meters (981 feet) long, 45.4 meters wide and 26.5 meters high, and will be built at KSOE’s shipyard in Ulsan to be delivered to the shipper by the second half of 2026.

KSOE has received the most orders of LNG carriers this year out of any company worldwide, with a total of 41 ships ordered. The company received 21 ship orders in 2020 and 26 in 2021, ranking first in the market share of LNG carriers in those years.

The Export-Import Bank of Korea predicted that global LNG trade would increase at an average annual rate of 4.3 percent until 2035, based on data recently announced by BP, a multinational energy company. These predictions are expected to lead to a stable amount of orders for LNG carriers at least until 2030.

“The strong demand for LNG carriers that has been rising since last year is leading to a large number of inquiries for new orders,” said an official from KSOE. “In addition to building LNG carriers, we plan to lead the green ship market by developing various alternative fuel technologies such as ammonia fuel.”

The three largest Korean shipbuilders have all been faring well this year. Daewoo Shipbuilding & Marine Engineering (DSME) and Samsung Heavy Industries, along with KSOE, have already won about 87 percent of this year’s order target.

According to the Ministry of Trade, Industry and Energy on Wednesday, orders received by these three shipbuilders between January to July this year amounted to $30.52 billion, or 86.9 percent of this year’s target.

“Due to new environmental regulations set by the International Maritime Organization and the increase in demand for LNG following the Russia-Ukraine war, order intake by Korean shipbuilders will continue in the second half of the year,” said an official from the Ministry of Trade, Industry and Energy.