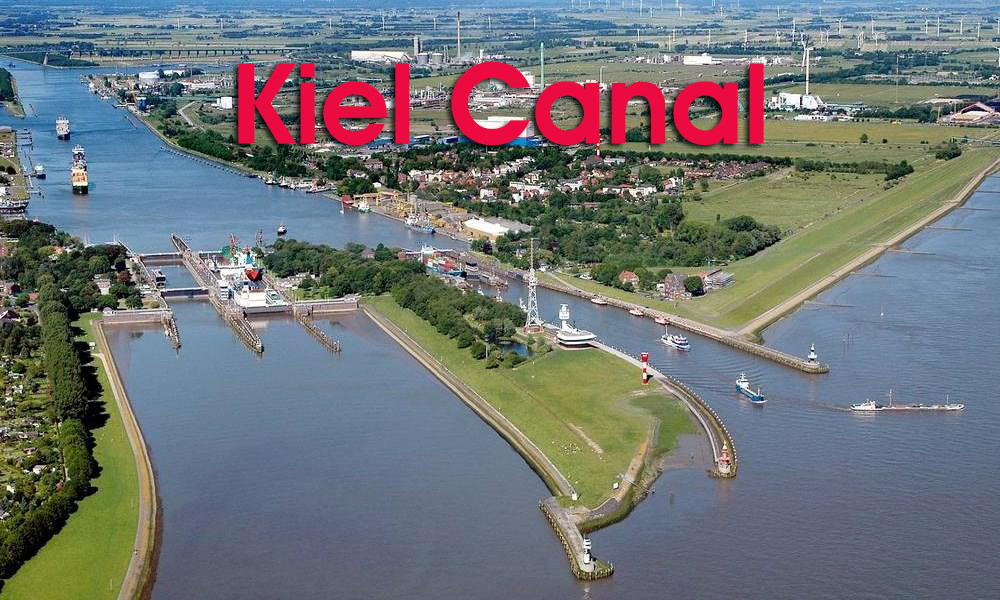 Kiel Canal, between the North and the Baltic Sea situated in the German state of Schleswig-Holstein is 98 km long freshwater canal and is the world’s busiest artificial waterway, more than 40,000 merchant vessels and nearly 20,000 pleasure craft pass through it each year and constitutes the safest, most convenient, shortest, and cheapest shipping route between the two seas.

Initial planning for the construction of a waterway through Schleswig-Holstein dates back to the 7th Century and was driven by the intention to facilitate trade. Eventually for strategic and military concerns rather more than the will to support trade the first connection between North and Baltic Seas was made in 1784 during the reign of Christian VII of Denmark. Then called the ‘Eider-Canal’, was artificially-built 43 kilometers long canal formed part of a 175-kilometers waterway from Kiel to the Eider River’s mouth at Tönning on the Schleswig-Holstein west coast. It was only 29 meters (95 ft) wide with a depth of three meters (ten feet), which limited the size vessels that could use it to 300 tdw.

In June 1887 a combination of naval and commercial interests encouraged the construction of a new canal. The canal took over 9,000 workers eight years to build. On June 20, 1895, it was officially opened by Kaiser Wilhelm II for transiting from Brunsbüttel to Holtenau. The next day, a ceremony was held in Holtenau where Wilhelm II named it the Kaiser Wilhelm Kanal (after Kaiser Wilhelm I), and laid the final stone. As a waterway for naval and civil purposes Kiel was a huge success. Ten years later again with size requirements of the German Navy in mind between 1907 and 1914, the Canal was widened and its lock capacity increased. This upgrade allowed battleships to pass through which meant they wouldn’t have to go around Denmark. The enlargement projects were completed by the installation of two larger canal locks in Brunsbüttel and Holtenau.

The canal was originally going to be lock-free but wind-induced water level variations and tidal water variations, particularly in the North Sea and Elbe meant canal flow velocities were too high. So the canal has four lock chambers are available for ships entering or leaving Kiel Canal at its western end in Brunsbüttel, in which the ‘big’ lock chambers are used by all sizes of ships. While the Kiel Fjord directs ships to the giant Holtenau locks at the eastern end of the Kiel Canal.

After world war the traffic in the canal changed and due to increased ship sizes. The canals development was going at a very slow pace for decades until 2014 the canal didn’t receive proper funding for upgrades. In 2014 funds for the construction of the fifth lock chamber in Brunsbüttel were eventually released by the competent Committee under the German parliament. This paved the way for a rapid assignment of building contracts and thus the construction of the much-required fifth lock chamber.

The Kiel-Canal passage can be performed at any time and usually immediately upon vessel’s arrival. Transit from lock to lock has to be calculated with approx. 8 hours depending on the traffic situation and including time needed for passing the locks of Kiel-Holtenau and Brunsbüttel. The canal remains an important route for Baltic shipping.

Kiel Canal is Europe’s main transportation route and is very significant in the trade and commercial sector, it generates about 3,500 jobs and also facilitates the development of ports and maritime industry including yards, brokers and agents, ship suppliers, service companies, etc. The Canal as well as Germany’s ports are centers of industry, trade, tourism and gastronomy. Germany’s sea ports depend on the well-functioning of the canal to generate employment of around 500,000 people making it very important to maintain the waterway. It creates an annual gross value of about 29 billion euros and (German) tax income of between 10.2 and 11.6 billion euros.