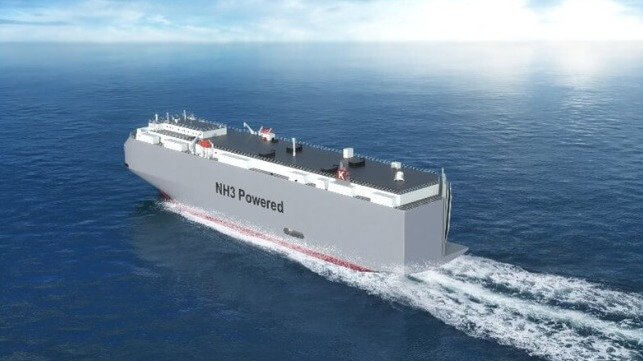 K Line, together with Shin Kurushima Dockyard, announced they have gained an approval in principle (AIP) from ClassNK for the new carrier. Ammonia, one of the most promising future fuels for the deep-sea shipping industry, does not emit carbon dioxide (CO2) during combustion.

According to ClassNK, although ammonia is expected to be used as decarbonized fuel for ships, adequate safety measures are essential since the gas is toxic to humans and corrosive for materials. While international standards for using ammonia as ship fuel are yet to be developed, ClassNK has already published design safety guidance for ammonia-powered propulsion, including requirements for installation, controls and safety devices.

In a joint study for the ammonia-fueled car carrier, Shin Kurushima, ClassNK and K Line formulated a potential risk assessment and safety measures for using ammonia as a fuel. Based on the safety evaluation of ammonia, they worked on the development of a ship that can both reduce environmental impact and meet operational requirements.

K Line has revised a part of its long-term environmental guideline, setting a new goal for 2050 to achieve net zero GHG emissions. The goal is in line with the Paris Agreement, and it aligns with the efforts of many governments and industries to achieve net zero emissions in 2050. It is twice as ambitious as the IMO’s goal of achieving a 50 percent reduction in emissions by 2050.

Early this month, K Line announced that it had conducted a trial use of marine biofuel on the car carrier Polaris Highway. Marine biofuel is already available and has the potential to become an environmentally friendly alternative, the line said, with the possibility of reducing CO2 by about 80-90 percent.