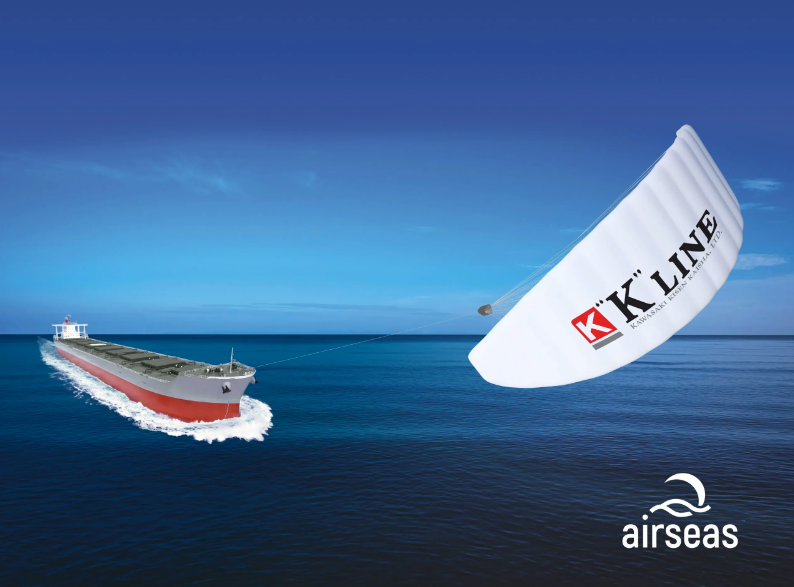 Kawasaki Kisen Kaisha (“K” LINE), one of the world’s largest shipping companies, has confirmed orders for three additional Seawing systems, bringing to a total of five the number of its vessels that will use Airseas’ innovative wind propulsion technology to reduce their emissions.

Under the agreement, the third, fourth and fifth Seawing systems delivered to “K” LINE will be installed on post panamax bulkers, following the two initial installations on capesize bulkers, which are scheduled to take place from the end of this year. These additional orders demonstrate the strength of the partnership between “K” LINE and Airseas, as well as “K” LINE’s commitment to use wind propulsion as a major pillar of its decarbonisation strategy.

The Seawing systems that will be installed on the “K” LINE vessels consist of parafoils that fly around 300 metres above the sea level, harnessing the power of the wind to propel the vessel and reduce the main engine load, aiming to save an average of 20% fuel and emissions. The systems will use digital twins and advanced automation systems, drawing on aerospace expertise, to ensure that the Seawing systems can be safely deployed, operated and stored at the push of a button with minimal input needed from crew. Furthermore, Airseas and “K” LINE signed a technological cooperation partnership to integrate Seawing and “K” LINE’s vessel data platform, named Kawasaki Integrated Maritime Solutions, to maximise the performance of the systems.

This will support “K” LINE’s ‘Environmental Vision 2050’, in which the company has committed to considerably and continuously reduce its GHG emissions, notably through the introduction of innovative technologies.

In addition to the three orders announced today, “K” LINE had previously confirmed that the first of its vessels to be fitted with a Seawing will be a 210,000-dwt capesize bulker, with the installation to take place in December 2022. The second “K” LINE vessel to feature a Seawing will be a newbuild LNG-fuelled 210,000 dwt bulk carrier, which is currently being built at Nihon Shipyard. Airseas has a 20-year agreement with “K” LINE, with options for the Seawing to be installed on up to 50 of its vessels in total.

Michitomo Iwashita, Managing Executive Officer of “K” LINE, said: “At “K” LINE, we are committed to delivering the cargo needed by people and businesses around the world safely and efficiently, while minimising our environmental footprint. We have adopted an ambitious net-zero GHG emissions target by 2050, and deploying technologies such as wind propulsion which is a key component of our strategy. We are proud to be partnering with Airseas, a leader in the wind propulsion field, that has done so much to bring the technology into the next generation via the development of Seawing. We look forward to seeing it deployed on our fleets in the coming years.”

Vincent Bernatets, Co-Founder and CEO of Airseas, commented: “We are proud that “K” LINE has selected us as a long-term partner in their journey towards a lower carbon future, and we are delighted to see our partnership going one step further with these new orders and additional technical cooperation activities announced today. A true market leader, “K” LINE recognises that ships being built now will need to meet the decarbonisation standards of the 2040’s and 2050’s, as regulators and customers step up pressure for the industry to decarbonise. Wind propulsion systems like the Seawing help lay the long-term foundations for the sustainable shipping of the future by reducing emissions right now, in addition to delivering a strong return on investment in the short term via fuel savings.”