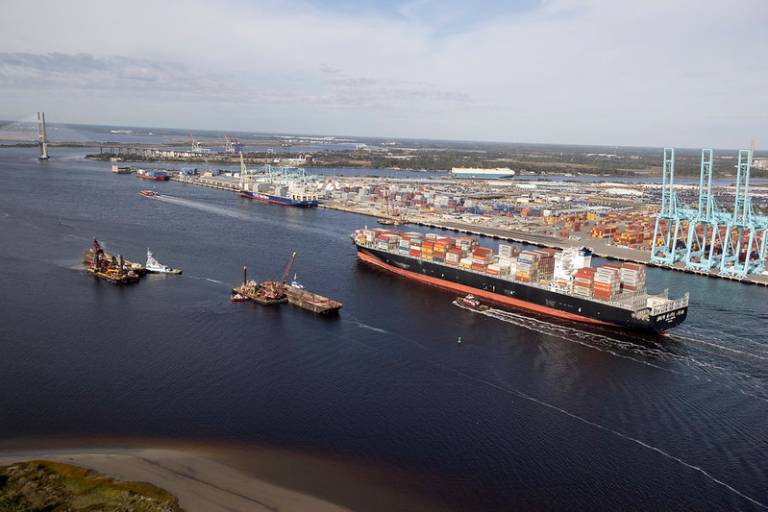 Throughout the pandemic, Jaxport has had no vessels waiting at anchorage to enter the Jacksonville harbour. In addition, the port offers available berth and terminal capacity to easily accommodate vessels displaced by congestion at other US ports.

Earlier this month, ocean carrier Hapag-Lloyd announced the company is temporarily routing a European container service to Jaxport to “adapt to market needs.”

Strong consumer demand bolstered the port’s auto business to near pre-pandemic levels with 616,000 vehicles, a 13% increase over 2020 volumes. An industry-wide shortage of vehicle parts, most notably microchips, tempered auto volume growth during the second half of the year.

“Achieving a container record and strong vehicle volumes while maintaining our efficiencies—all in the middle of a pandemic—speaks to the resiliency and capability of Jacksonville’s maritime community,” said Jaxport CEO, Eric Green. “Our port workers, terminal operators and service providers have shown the world that Jaxport is a solution to the nation’s port congestion problem.”

Jaxport’s single biggest growth initiative, the federal project to deepen the Jacksonville shipping channel to 13.7m from its current depth of 12.1m, will be completed through Blount Island in June 2022. More than $200m in berth enhancements are underway to enable Blount Island to simultaneously accommodate two post-Panamax vessels and handle more containers.

In addition to being Florida’s largest container port and one of the nation’s busiest vehicle-handling ports, JAXPORT is also one of the nation’s most diversified ports in trade lanes and lines of business. Other cargoes include breakbulk, dry bulk, and liquid bulk, heavy lift, refrigerated cargo, forest products, high and heavy, liquefied natural gas (LNG), and US military cargo.