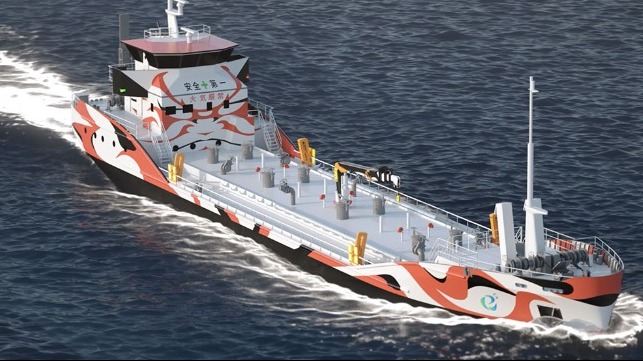 Japan’s Asahi Tanker Co. ordered two of the world’s first zero-emission electric-powered bunker vessels to operating in Tokyo Bay. The construction project will be managed by Kawaski Heavy Industries, with one vessel built at the Koa Sangyou shipyard Marugame, Japan and the other at Imura Zosen KK in Komatsushima, Japan. No timeline was released for the construction or when the vessels would enter service.

The two tankers will be based on the e5 tanker design developed by e5 Lab. They will be powered by large-capacity lithium ion batteries using an all-electric core energy system. According to the designers, in addition to the environmental benefits, they will reduce noise and vibration, creating a more comfortable work environment for the crew members while also limiting noise pollution in Tokyo Bay.

Another unique feature of the vessels is a resigned work flow, including the adoption of various automated equipment and digital tools, including Internet of Things (IoT), in order to reduce the crew workload. This was a key consideration of Japan’s merchant marines which are both aging and declining in number. According to Asahi the applications of these technologies will increase the ship’s operating efficiency.

Plans for the two bunker vessels were first announced in the spring of 2020. In May 2020, seven Japanese companies expanded the efforts of the e5Lab with the establishment of the e5 Consortium to develop, realize, and commercialize zero-emission electric vessels. e5 stands for the five core values of the project, which are: electrification, environment, evolution, efficiency, and economics.

Specifications for the electric-powered tankers