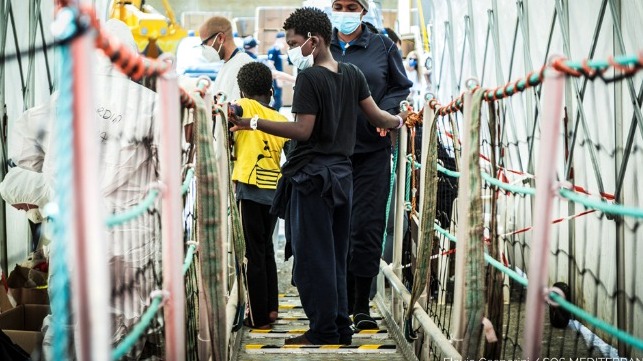 Faced with the prospects of another humanitarian crisis, Italy over the weekend granted permission for two rescue vessels crammed with refugees saved from the Mediterranean to dock and begin the process of offloading. Last week, Italy had called on the European Union and member states to become more involved in the ongoing refugee crisis in the Mediterranean.

Experts report that thousands of migrants and refugees seeking to escape from the poverty and violence of Africa are attempted to make the crossing to reach Europe. Many are paying smugglers who pack them aboard small, unsafe wood boats and set them off into the Mediterranean. Others attempt the crossing on their own often in nothing more than dinghies and inflatable boats. The IMO estimates that almost 1,000 people have died this year alone attempting the crossing.

The first of the two rescue vessels, the SeaWatch3 operated by the German humanitarian group Sea Watch was permitted to dock in the port of Trapani on August 7. “We are happy to finally have a port of safety,” Sea Watch said in a Tweet. “Before our guests can safely go ashore, all 257 rescued people on board will be tested for COVID-19.”

The second vessel, the Ocean Viking operated by the French organization SOS Mediterranee was permitted to dock the following day, August 8, in the port Pozzallo, Sicily.

Both organizations were thankful for the assistance being provided by the Italians, but noted that it is a slow and frustrating process with only a portion of the refugees being permitted ashore during the day. More than 24-hours after arriving Sea Watch Tweeted that there were still 17 people on their ship out of the 257 that had been aboard when they docked. They noted that some refugees had been aboard for nine days. Similarly, SOS Mediterranee reported that when disembarkation stopped today only 197 survivors had been landed, including unaccompanied minors, medical referrals, and families. The vessel arrived with 549 people, all of whom had been saved from the Mediterranean at the beginning of August.

While both organizations were frustrated by the slow pace of disembarkation, their focus remains on the larger humanitarian crisis.

“Too often in the past three years, those rescued at sea had to wait for days to disembark, to the detriment of their mental and physical health,” said SOS Mediterranee in a statement. “These inhumane stand-offs cannot become the norm. European countries urgently need to revive the process towards a predictable disembarkation mechanism.”

Italy’s Interior Ministry had also expressed its concern over the scope of the crisis. They made an official request to the EU for “activation of a mechanism that involves the member states to allow for docking that is safe and compatible with anti-COVID-19 measures, to NGO ships flying European banners.”

Undeterred though both organizations expect to send their vessels back into the Mediterranean just as soon as they are permitted by the local authorities.