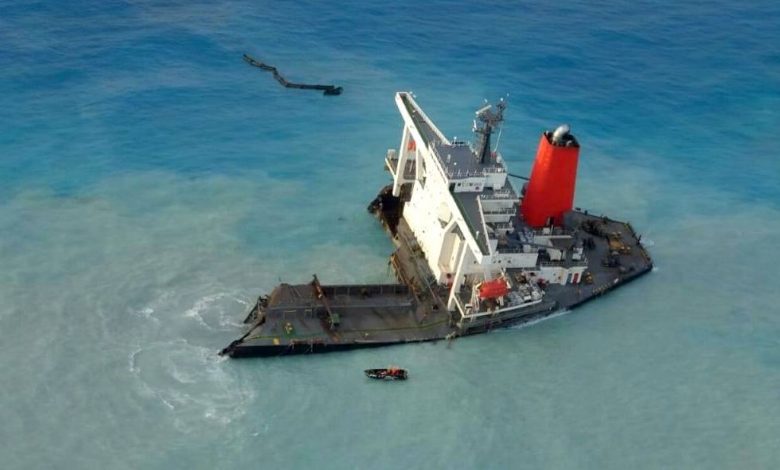 A protest march is planned across the island of Mauritius tomorrow at midday as locals react with anger to the government’s slow handling of the oil spill from the Japanese-owned Wakashio bulk carrier. Protests are also being planned at the same time on Saturday in front of the Mauritian embassies in capital cities around the world.

The newcastlemax ran aground on a reef of Mauritius on July 25 and started to leak oil 10 days later before splitting into two. The rear of the ship is still sitting on the same reef while the front three quarters have been towed to deep waters 25 km away and sunk.

In the last three days a total of 34 dead dolphins have washed up along the Mauritius shoreline, further inflaming local indignation at the accident. Initial autopsy results of two of the dead mammals, however, show no traces of oil.

The captain and the first officer of the ship have been arrested, charged with “endangering safe navigation”. The ship clearly deviated from its intended route in the Indian Ocean as it approached Mauritian waters.

The leader of the opposition party today grilled the prime minister, Pravind Jugnauth, asking him three key questions on the Wakashio disaster: when was the environmental arm of the salvage company appointed; how many times did the coast guard try and contact the ship; and what the prime minister made of comments from a French minister who visited the country a fortnight ago and said his country would have handled the situation differently.

CMCC, an Italian NGO which has been monitoring the bunker spill daily, provided an update today.

“Potential oil movements from contaminated beaches at Vieux Gran Port and Ile aux Aigrettes towards South impacting the Mahebourg area and Pointe D’Esny, respectively, will persist. The SW transport of part of the beached oil found close to the Wakashio wreck will remain intense,” the bulletin noted, adding that much of the southeast coast of the island was still being impacted from the fuel.

Insurers are bracing for a bill in excess of $500m from the disaster. The 203,000 dwt ship is owned by Nagashiki Shipping and was on charter to Mitsui OSK Lines (MOL). Anglo-Eastern serves as the crew manager to the stricken vessel.