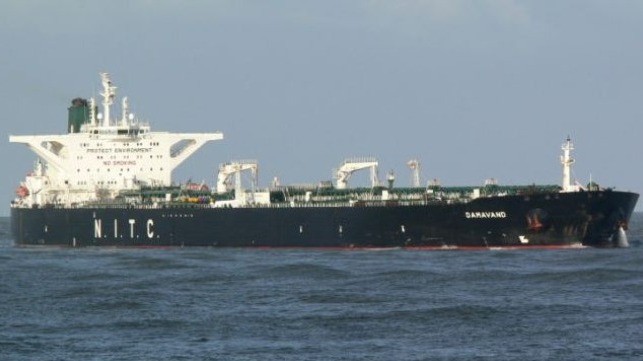 Iran and Venezuela have reached an agreement to swap two grades of oil, giving Venezuela a new supply of extra-light crude that it can blend with its sulfurous, extra-heavy Merey oil for export. The deal – first reported by Reuters – will see cargoes of Iranian condensate from the National Iranian Oil Company (NIOC) exchanged for crude shipments from Venezuelan state oil firm PDVSA.

TankerTrackers.com has identified the first of the vessels involved the swap, the Iranian-flagged VLCC Felicity, at Venezuela’s Jose oil terminal complex.

The deal appears to violate United States sanctions on the oil sectors of both nations. Iran faces stiff American sanctions measures related to its nuclear program, and virtually any organization could face U.S. Treasury enforcement penalties for buying Iranian oil, chartering Iranian ships or transacting with the Iranian banking system. Likewise, PDVSA is under U.S. sanctions for its role in supporting the regime of Venezuelan President Nicolas Maduro, who has held onto power in spite of a crippling economic collapse, an attempted uprising, and concerted attempts by the international community to replace him with an opposition political leader.

Since both nations are already fully sanctioned, they face few additional penalties for doing business with each other, and they have traded commodities in the past. In May 2020, three Iranian-flagged product tankers called at Venezuela’s Puerto Cabello terminal to offload much-needed Iranian gasoline, which was in short supply. The Venezuelan government paid for the cargo in gold, a senior Islamic Revolutionary Guard Corps officer confirmed last September. The value of the transaction was about $500 million, according to Bloomberg.

“We will continue to enforce both our Iran and Venezuela-related sanctions,” a Treasury spokesperson told Reuters.

The U.S. has indicated that sanctions on the Maduro regime could ease if it makes moves towards free and fair elections. Venezuela’s opposition parties are currently negotiating with the Maduro government over the details of a regional and municipal election on November 21, and they plan to participate, ending a series of boycotts of previous elections.