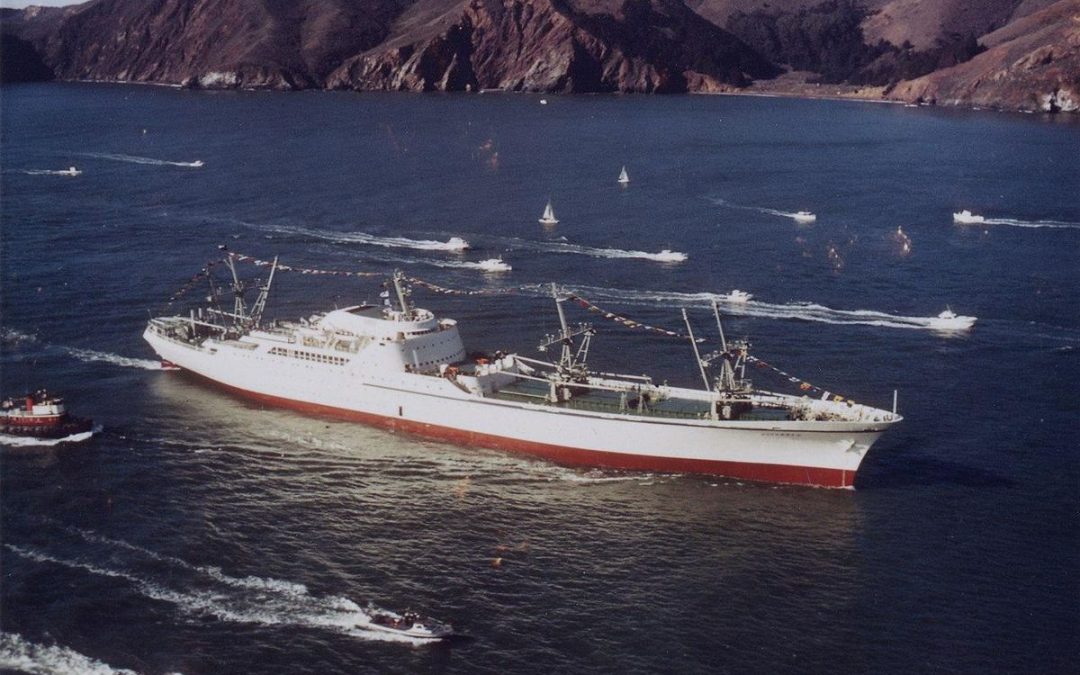 It didn’t take a Biden-Harris win to make the world’s shipping industry act to decrease their carbon footprint – they were already planning to do that.

The IMO is targeting a reduction in the carbon intensity of international shipping by at least 40% by 2030 compared with 2008 levels, and by 70% by 2050. The IMO took this action in support of the United Nations Sustainable Development Goal 13, to take urgent action to combat climate change and its impacts.

The International Shipping Industry shares about 90% of the global trade in goods, with more than 53,000 merchant ships currently operating in the oceans. They account for over 6% of the global oil use, or about 5 billion barrels per year.

The IMO is considering a range of long-term zero-carbon fuel solutions, such as ammonia and hydrogen, but it’s nuclear that provides the most promise with respect to fuel cost and performance.

As expected, the IMO is considering small nuclear reactors, similar to those that have made our Nuclear Navy so successful. Just like the Navy, the big shipping fleets have very large ships that require a hug amount of fossil fuel.

The new OOCL Hong Kong container ship is 1,300 ft (400 m) long, longer than any aircraft carrier. And there are many more that size in the shipping fleet.

Note: the OOCL was designed to be super energy efficient, like all new ship. It uses only 21,000 gallons per day of fuel and emits 60% less greenhouse gasses than traditional ships. The IMO feels that the biggest emissions savings in the next ten years will come through these types of design enhancements.

The carbon savings from nuclear powered ships is best demonstrated by comparing similar sized ships. We have a great deal of experience with both conventionally fueled ships and nuclear powered ships. The United States Navy alone has over a hundred nuclear reactors that power 86 submarines and aircraft carriers, producing electricity, heat and propulsion.

As Gary Hoe points out, when steaming all-ahead-flank on all four screws, launching aircraft off all three steam catapults, cooking 4,500 meals for lunch, and desalinating sea water into fresh, the Kennedy got 13 inches to the gallon of marine distillate fuel oil.

That meant 1000 gallons were burned for the Kennedy just to travel its own length. Or over 125 million gallons to circumnavigate the Pacific Ocean once.

The Ike uses almost no fuel to carry out the same mission. The Ike steamed for 20 years on a chunk of uranium the size of a grapefruit, and is still active today. The Kennedy is mothballed.

Besides fuel savings, nuclear powered ships go about 50% faster than oil-fired ships of the same size. For the shipping industry, the increased number of runs per year, and the increased profits, appear to more than offset the increased operational costs of nuclear, according to an analysis by researchers at Penn State.

While we think of small modular nuclear reactors as something new that will take nuclear power to a new level, which is true, the reactors of the Nuclear Navy are actually the original SMRs.

This set of rules refers to a detailed and comprehensive Code of Safety for nuclear merchant ships, which the IMO Assembly adopted in 1981. It would have to be updated to reflect new technologies, but it should overall cover them.

While those unfamiliar with nuclear powered ships might worry about safety, America’s Nuclear Navy has the world’s best safety record of any industry of any kind. In terms of work hazards apart from combat, it is safer to work on a U.S. nuclear submarine or aircraft carrier than it is to sit at a desk trading stocks.

Thousands upon thousands of people, 22,000 thousand people at any one time, have lived, worked, eaten and slept within a stone’s throw of these nuclear reactors for 60 years with no adverse effects from radiation at all. In fact, nuclear sailors have lower cancer death rates than the age-matched group in the general population

Annual radiation doses to Navy personnel have averaged only 0.005 rem/year (5 mrem/year; 0.05 mSv/year), a thousand times less than the federal 5 rem/year allowed for radworkers. Normal background radiation in the United States varies from 100 mrem/year to over 1,000 mrem/year.

The Nuclear Navy has logged over 5,400 reactor years of accident-free operations and travelled over 130 million miles on nuclear energy, enough to circle the earth 3,500 times.

From the time of the USS Nautilus in 1954, to the present, no civilian or military personnel on these ships has ever exceeded any Federal radiation limit. And none of those more than a hundred thousand people has ever been harmed by radiation from reactors or facilities with which they were so intimately in contact.

Numerous reports from the Naval Nuclear Propulsion Program Office provide detailed information of personnel exposures from living and working in nuclear submarines and on nuclear ships, as well as working in the on-shore facilities that produced fuel and materials for the Nuclear Navy such as nuclear propulsion plants and nuclear component engineering plants.

So the shipping industry would do well to have nuclear power take over propulsion and other energy needs in its fleet of very large ships. Obviously, they should wholly adopt the Nuclear Navy’s protocols and procedures – they’ve worked so well for so long – there isn’t any reason to re-invent the wheel.

The potential savings of over 5 billion barrels of oil a year is an awfully good step towards lowering the shipping industry’s carbon footprint.