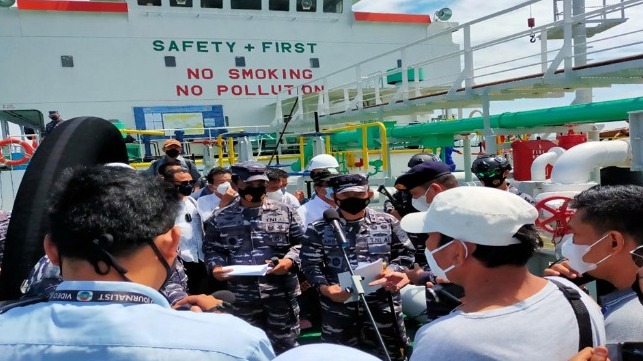 Indonesian authorities announced that they are detaining a Panama registered oil tanker on suspicion of illegal activity in the country’s waters. The “suspicious” tanker reportedly entered Indonesia waters without the proper permits and the authorities were unclear as to what the vessel’s intentions were. Earlier this year, Indonesia discovered another Panama register tanker involved in an illegal ship-to-ship transfer of oil with an Iranian tanker.

In the latest case, the Indonesian Navy seized the MT Zodiac Star late on September 1. The 4,990 dwt tanker with a crew consisting of 18 Indonesians and one Malaysian was discovered in the waters of the Riau Islands located between Malaysia and the island of Borneo. The vessel was found to be carrying more than 4,000 tons of possibly waste oil.

“Due to the violation, MT Zodiac Star was taken to Lanal Batam for further investigation,” a spokesman for the Indonesian Navy said during a briefing. “The examination process has been carried out with the captain, witnesses, and experts, in order to complete the details of the examination before it is submitted to the prosecution.”

The investigation is ongoing to determine the tanker’s purpose and destination. The Navy said it would remain detained at the naval base and if charges are brought against the captain and crew they could include up to five years in prison and fines up to $42,000.

In July, the Indonesian Navy detained another tanker that was involved in a financial dispute with a Cambodian energy project. The Cambodians alleged that the tanker, the Strovolos, had stolen 298,000 barrels of oil.

Indonesia’s authorities detained an Iranian tanker and a Chinese-owned vessel registered in Panama for more than four months and fined the Chinese vessel $140,000 for a pollution offense in May 2021. The Indonesia Coast Guard discovered the two vessels operating “dark” and not displaying national flags anchored at the northern end of the Singapore Strait. The vessels also attempted to hide the names and did not respond to calls from the Indonesia Coast Guard. The Indonesians accused them of being involved in an illegal ship-to-ship transfer of oil.