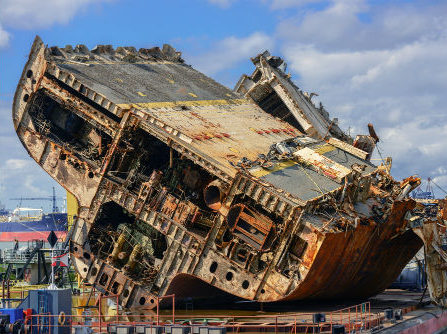 Shipping Ministry is making rules for the ship recycling industry – which is at present at 4.5 million tonne per annum (mtpa) capacity and is expected to double by 2024.

“The Ship Recycling Act was promulgated in 2019, we are in the process of making rules for it,” Shipping Ministry Secretary Sanjeev Ranjan, said in a conference on February 11.

The move will make the recycling sector of India more eco-friendly in keeping with world standards. India will make efforts to bring more ships to India from Europe and Japan.

Incidentally, there are also plans to synchronise India’s vehicle scrapping with ship recycling. Indicating the potential business next year in the port sector, Ranjan said the operational services at ports will be put on a public private partnership mode, particulalry projects of up to ₹2,000 crore.

Earlier, Finance Minister Nirmala Sitharaman announced in the Budget, major ports will be moving from managing their operational services on their own to a model where a private partner will manage it for them.

The Maritime India Summit to be inaugurated by the Prime Minister, will be held through a virtual platform between March 2-4. The budget also announced a ₹1,624 crore subsidy over five years to promote the flagging of merchant ships in India. This is expected to enable training and employment opportunities for seafarers besides enhancing Indian companies.

Work is on at a fast pace to connect land-locked Nepal through road with Sahibganj, a multi-modal logistics hub, which will further connect Nepal with the sea through inland waterways, Mansukhlal Mandaviya said in the conference here.

Mandaviya added that many companies are interested to operate seaplane services along certain routes. The Shipping Ministry will make the infrastructure, while the Aviation Ministry will be responsible for getting sea-plane operators, he added.