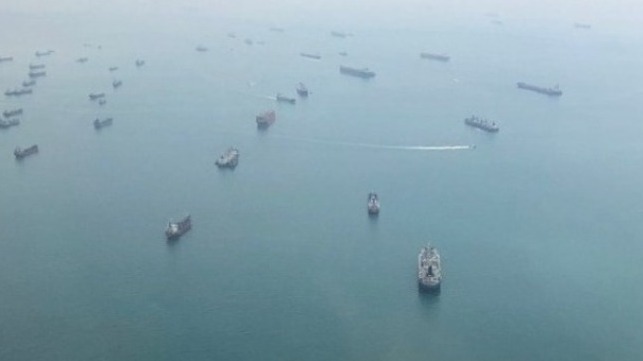 Indian authorities proposed to their Chinese counterparts facilitating a crew change at sea for the crew members stranded aboard the vessels anchored for months off the Chinese coast. Responding to media questions in a written statement, India’s Ministry of External Affairs said that the cases of the bulk carriers Jag Anand and Anastasia, along with the other vessels waiting off the China coast, “are being pursued vigorously.”

The Indian ministry in its response said, “We have noted the statements of the Chinese side, expressing their willingness to extend their assistance in this matter. We expect that this assistance will be provided in an urgent, practical and time-bound manner, given the grave humanitarian situation that is developing on board the ships.”

In the latest proposal to resolve the stalemate, the Indian Ministry says that it understands the Anastasia is exploring the possibility of a crew change at sea at its current point of anchorage in Caofeidian. The Indian Embassy sent a letter on December 31 to the Chinese authorities supporting the proposal and requesting that it be approved.

China, for its part, denies reports that the ships are being held offshore in a trade dispute with Australia. The Indian ministry says that the Chinese authorities have conveyed to them that on account of various COVID-19 related restrictions imposed by the local authorities, crew changes are not being permitted from these ports. The Chinese Ministry of Foreign Affairs suggested that the ships are free to depart their anchorages, but the ships’ operators fear leaving the anchorage for a crew change they would not be permitted to return to the ports preferring instead to wait out the trade dispute to deliver their cargo.

The Indian authorities said that their Embassy in Beijing has repeatedly raised the situation with the Chinese Ministry of Foreign Affairs and also the provincial authorities, requesting that the ships be allowed to dock or a crew change be permitted. The Indian Ambassador has taken up this issue with Vice Foreign Minister, the statement said, while the ministry has also been following this issue with the Chinese Embassy in India.

The National Union of Seafarers of India (NUSI) attempted to bring world attention to the plight of the seafarers in November calling for a global email campaign to the International Maritime Organization. Other organizations, including the International Transport Workers’ Federation (ITF), have also responded, calling for action to address the crew welfare with some seafarers on the ships for 20 months or more.

MSC Shipping as the technical operator of the Anastasia says it attempted crew changes in Hong Kong in June and August that were blocked by COVID restrictions. Japan approved a crew change in August, but it was not implemented according to MSC, followed by efforts to organize a crew change in Manila, Hong Kong, Singapore, and Busan, all of which were also refused. MSC said that it had been suggested that the ship sail to Japan, where a crew change might be permitted while the Chinese authorities suggested the ships might apply to the Tianjin port in China where the local authorities would examine the requests once they were received. All of these options require the vessels, however, to leave their current ports and lose their place in line to offload their cargo.

The Indian Ministry of External Affairs says that they are continuing to be in close and continuous contact with the Chinese authorities in Beijing, Hebei, and Tianjin. They are calling for an early resolution and promised to provide updates on further developments.