India Bound to Make Waves In the Tanker Market 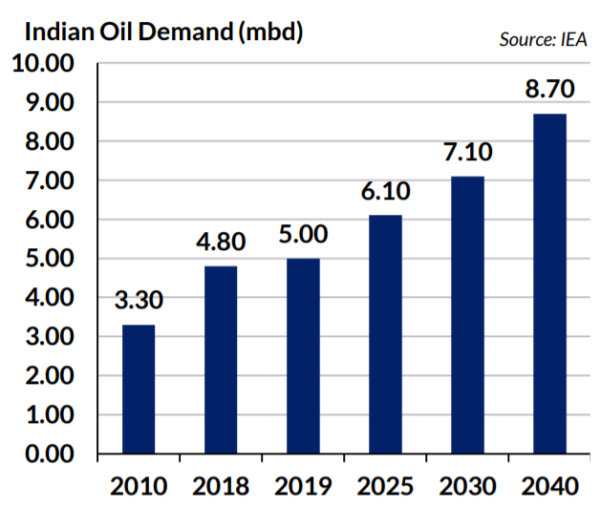 India is gearing up to become a major player in seaborne oil demand, offering a valuable boost in the tanker market. In its latest weekly report, shipbroker Gibson said that “like most nations, Indian oil demand has come under considerable pressure in 2020 as covid-19 derailed the country’s continual demand growth. Nevertheless, the longer-term prospects for Indian oil consumption are good with demand already rebounding even as covid-19 continues to impact the wider economy”.

According to Gibson, “this rebound in demand is evident in both refinery and crude buying activity. Indian refinery runs gained 10% month on month reaching 86% in September, with further gains expected for November and December. Government sources have suggested that oil demand could be back to pre-covid levels in the first quarter. Furthermore, official data showed that September gasoline demand recovered to 2.45 million mt, the highest since February and 3% up YOY. Crude imports have also shown a strong recovery, reaching 4.2mbd this month, the highest since March and up 550kbd on September according to Kpler. The question now going forwards is can this trend be sustained?”

“Ultimately this will depend on the country’s recovery from covid-19 and government policy towards containing the virus; however, it is more a question of when, not if, Indian oil demand recovers. The country is expected to contribute the largest share of demand growth over the next 10 years as car ownership continues to rise and aviation demand expands”, said the shipbroker.

Gibson also noted that “to match this continual demand growth, the nation will need to expand its refining capacity, which has seen slower growth rates in recent years, with most projects focused on expanding/debottlenecking existing plants, opposed to new greenfield developments. Nevertheless, crude processing capacity is expected to increase by 600kbd between 2019-2025, supported in part by the start-up of HPCL’s 180kbd Barmer refinery in March 2023 in addition to upgrades and expansions. Beyond the HPCL project, CPCL plans to launch a new 180kbd facility in Nagapattinam, although it may take until the second half of the decade to come onstream. The most notable development, however, is the planned 1.2mbd project in Maharashtra in partnership between domestic players IOC, HPCL and BPCL, and foreign investment from Saudi Aramco and ADNOC. Yet, with a price tag of $70b and uncertain market conditions, FID is yet to take place”.

According to the shipbroker, “for the tanker market these developments are of course positive. How positive depends on where the crude is sourced from. In the current sanctions environment, long haul crude flows from Venezuela are likely to remain minimal, whilst the planned 1.2mbd project will be designed to run Saudi and UAE grades, most likely under term contracts. Increased buying from the US is likely, but much of the installed complex capacity is more suited to heavy sour grades, limiting the substitution with lighter/sweeter Atlantic grades. Regardless, as the largest contributor to oil demand growth over the next two decades, India’s importance for the tanker market is set to increase”, Gibson said.

Meanwhile, in the VLCC market this week, in the Middle East, the shipbroker said that “not even Halloween, but for VLCC Owners it was a week long nightmare nonetheless. Never enough activity to dent very easy availability and rates compressed into an even lower range to leave even the most economic units struggling to better Opex returns. High ws 20’s is about the very best that can be achieved to the East, with any rare runs to the West market to ws 15 via Cape. It may prove a little more active next week but the header tank of tonnage will also remain to suppress. There was Suezmax improvement week on week but just as the market started to get small new legs, volumes evaporated once again and rate gains were pared back to end at a modestly higher ws 40 level to the East and to ws 15 West, with perhaps even further retreat into next week.Aframaxes struggled to get out of reverse gear and slipped further to 80,000mt by ws 50 to Singapore where they will remain over the near term, at least”, Gibson concluded.