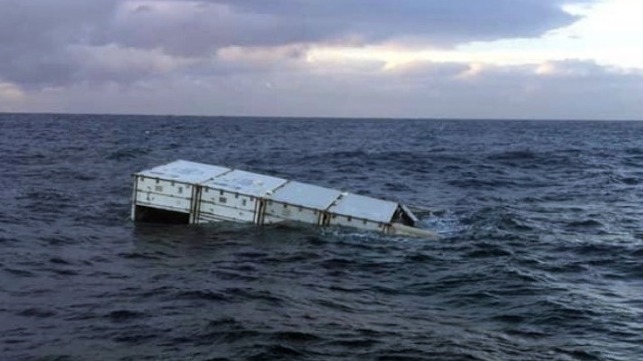 The committee raised a range of concerns during its discussion that focused on the loss of over 3,500 containers over the past few months in the Pacific Ocean. The One Apus was the most dramatic loss with the vessel’s representatives reporting that over 1,800 boxes were lost into the Pacific on November 30 due to what they said was high seas. Inspectors and analysts for cargo claims consultants WK Webster reported that out of the 22 bays on deck, only six appeared to have survived intact. With 20 rows per bay and with stack heights of 6-8 tiers, Webster estimated that approximately 2,250 containers were potentially impacted. Since the vessel was mostly carrying 40-foot boxes, Webster noted that it was equivalent to approximately 4,500 TEUs. It took nearly four months for the vessel to recover and return to service.

Summarizing the discussion by the IMO’s committee, the industry trade association BIMCO reported that the IMO agreed that the causes that may lead to the loss of containers at sea vary. It may be due to bad weather conditions or high waves creating instability on board. Inspectors for the class society, insurers, and cargo claims representatives will also be looking at the loading practices and equipment and design of the vessels. Cargo associations also cite the dangers of misdeclared and overweight containers.

Regardless of the causes, the IMO committee also says the fact is that it is difficult to have precise figures on the number of containers lost. They highlighted particularly that container visibility from the bridge may be limited by the containers themselves, and only the upper tiers and the nearest bays can be seen. They discussed the dangers of pollution particularly in regard to the plastics in the containers.

When a relatively distant stack of containers collapses, it is difficult to determine immediately and precisely how many containers are involved and when they fell, the committee said. These events generally occur in adverse weather conditions that prevent immediate on-site investigation. For the crew, it is extremely dangerous to walk along unstable container stacks.

The IMO’s MSC, therefore, agreed according to BIMCO to initiate new measures to detect and report containers lost at sea, which may enhance the positioning, tracking, and recovery of such containers. The IMO agreed to establish a compulsory system to declare the loss of containers and setting up means on board to easily identify the exact number of losses.

Together with such a system, the ships are obliged to report the loss of containers through a standardized procedure, possibly detailing, e.g. identification, cargo carried (particularly dangerous goods or harmful substances), or whether these containers may float and constitute a risk of collision with ships and boats.

Over the next couple of years, BIMCO says the IMO will also develop measures designed to mitigate containers falling into the sea and to restore fidelity in the safety of container transport with the present fleet.