ICTSI Ecuador Unveils SEZ Plans At The Port Of Guayaquil 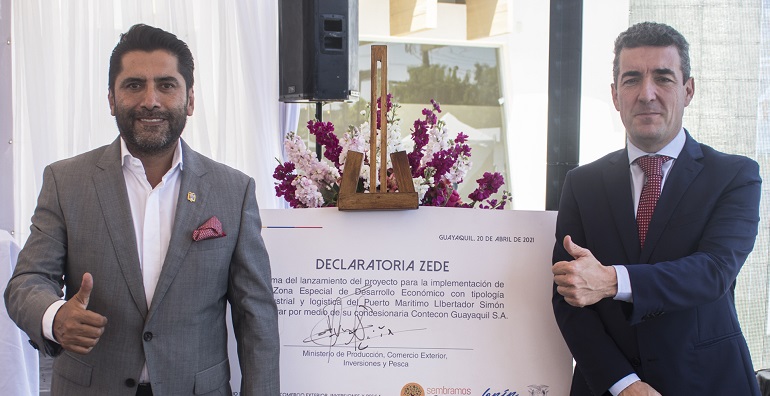 The port operator, together with national government and port authority representatives, formally presented its Declaration of Special Economic Development Zone (ZEDE) – a high-impact project that aims to strengthen the competitiveness of Ecuador’s exports.

ZEDE will be situated in an area adjacent to the port of Guayaquil – a prime and strategic location due to the port’s interconnectivity with the country’s main production centres, other maritime ports, and airports – creating a hub of strategic interest for national and international investments.

“The ZEDE promoted by Contecon Guayaquil S.A., has an unbeatable location, next to the Guayaquil port, with an absolutely clear and stable regulatory framework that will enable the development of long-term financial and tax planning while also covering activities included in the prioritised sectors of the Ecuadorian economy,” explained José Antonio Contreras, CGSA General Manager.

ZEDE will offer several tax incentives that include exemption from Income Tax for the first 10 years of the project and reduction of 10 points from the tax rate for the next 10 years; exemption from Foreign Exchange Exit Tax for up to 20 years; exemption from Foreign Trade Taxes for a similar period, as well as Value Added Tax credit on local purchases; benefits in sectional fees and taxes, depending on the location and location of the project; and benefits in special customs processes for the scheme.

“The declaration of this ZEDE speaks for itself, of coordinated public-private work (…) and that it should continue as a state policy,” said Iván Ontaneda, Ecuador’s Minister of Production, Foreign Trade, Investments and Fisheries.

ZEDE will also join the Port of Guayaquil’s environmental scheme to become the first carbon-neutral special economic zone in Ecuador. It will also implement a strict environmental sustainability plan starting from day one of its operations – a first for the region.