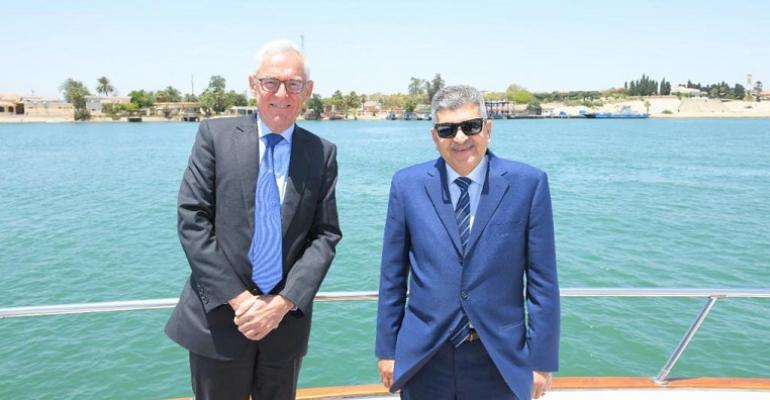 The International Chamber of Shipping (ICS) and the Suez Canal Authority (SCA) have formalised dialogue with the signing of an MoU on safety, pricing and carbon reduction.

The signings followed the first in-person set of meetings to take place in seven years between the organisation that represents 80% of the world’s merchant fleet and the government body that oversees one of global shipping’s most vital waterways.

The goal of the agreement, to take force for a year, will be to increase information sharing and negotiations on the movement of global trade through the canal. “It will open communication on long-term strategies for toll pricing, environmental protection, and decarbonisation,” the ICS said.

Egypt is increasingly positioning itself as a player in shipping-sector decarbonisation, with the country set to host COP27 in November. A maritime delegation led by ICS is scheduled to return to Egypt for the UN climate summit to continue dialogue on shipping’s transition to net-zero.

“The organisations hope [the MoU] will lead to in-depth collaboration on operational and structural policies of the Canal, the safety and security of transiting vessels, and enhancing pilotage, towing and repair services,” an ICS statement said. “The agreement follows a period of close co-operation between the two organisations, who have been in regular contact over the Covid-19 pandemic, and during the grounding of the Ever Given in 2021.”

The Suez Canal Economic Zone (SCZone) is increasingly taking the lead in the development of projects centred on the waterway, and last month announced a series of agreements with Emirati and Egyptian entities for the development of green hydrogen production plants at ports on or near the canal.

“ICS has enjoyed a close liaison with the Suez Canal Authority for almost a century. We thank the Authority for its hospitality and look forward to building on our cemented relationship,” Esben Poulsson, Chairman of the ICS, said.

“The maritime industry is at an inflection point as we earnestly begin our transition to a renewable future. The conversations we have had this week leave me with great confidence that Egypt will be one of the leaders of industry’s green transition, leaning on its position at the heart of the maritime world.”