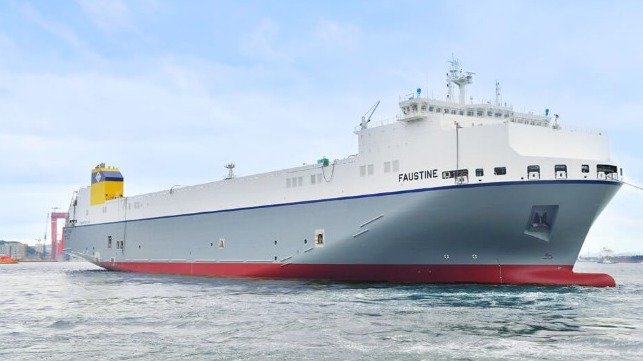 The Faustine is a 20,000 ton LNG-powered ro-ro ship. The vessel is 712-feet long with a beam of 90 feet. The vessel features 5400 lane meters, in a flexible combination designed to load cars, trucks, and trailers with containers from a stern ramp.

Propulsion is provided by a MAN dual-fuel engine that can operate both on LGN or diesel fuel. The reduction in sulfur emissions and efficient technologies means the vessel is capable of operating in Emission Control Areas, such as in Europe and North America. It can operate at a speed of 17.6 knots.

During the delivery ceremony, an official from Hyundai Mipo Dockyard noted that “demand for environmentally friendly and highly efficient ships is increasing.”

The yard highlighted several elements designed into the ship. The 337 cubic meter LNG fuel tank is made of nine percent nickel steel, which can maintain excellent strength and impact toughness even at a cryogenic temperature of -163 degrees (?). The C-type LNG fuel storage tank is located on the main deck.

In addition, by applying a shaft generator that can produce and supply electricity using the rotational force of the main engine, operating expenses and exhaust gas emissions were minimized. Other design features include four thrusters that support lateral propulsion that were installed to improve the ship’s maneuverability. In addition, the equipment layout and design were optimized to enhance stability.

CldN ordered the Faustine and a sister ship in July 2019 as part of an ongoing expansion program for its short-sea ro-ro fleet. The company previously took delivery on four conventional powered ro-ro and plans to add a total of 12 vessels in total. Before the delivery of the Faustine, the company had already increased available capacity by in the region of 70 percent.

LNG bunkering will be conducted in Rotterdam and Zeebrugge, where the ships will bunker by barge or truck on a regular basis.