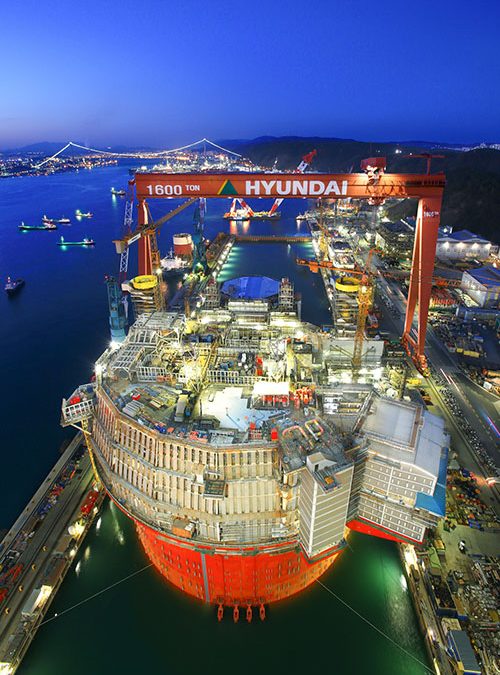 The feasibility of the scheduled Initial Public Offering (IPO) of Hyundai Heavy Industries is facing doubts as the plan may undermine the value of its parent firms.

Some concerns are already growing that the company’s 5 trillion won ($4.48 billion) valuation of itself may have been overhyped, casting a gloomy outlook on the pricing process of its new shares.

Hyundai Heavy said earlier it will launch an IPO and raise 1 trillion won by selling the company’s new shares accounting for 20 percent of the total to the bourse. The shipbuilder said it will invest the money for “eco-friendly future businesses.”

In 2019, Hyundai Heavy went through a spinoff and separated into a business division, which succeeded the name of Hyundai Heavy Industries, and Korea Shipbuilding & Offshore Engineering (KSOE), which is an intermediate holding firm controlling Hyundai Heavy and other shipbuilding affiliates of the conglomerate.

Following the spinoff, Hyundai Heavy has become an unlisted firm, with 100 percent of its stake held by KSOE, and has two holding firms above it ― KSOE and Hyundai Heavy Industries Holdings, which controls KSOE with a 31 percent stake.

Because of this structure, earnings of Hyundai Heavy have been fully reflected into KSOE’s share price. After the IPO, however, analysts said investors will interpret KSOE’s value as a pure holding company, which will likely discount its value on the bourse.

“It is obvious that the IPO will redefine KSOE as a holding firm,” Meritz Securities Analyst Kim Hyun said. “Except for some engineering functions, KSOE will be committed to the role of a holding firm, and the IPO may trigger risks over overvaluation of the combined earnings of Hyundai Heavy and KSOE.”

Kim compared Hyundai Heavy’s IPO to the recent spinoff and IPO plan of former LG Chem battery business division, LG Energy Solution, but said there are differences between the two cases. LG Chem’s share price fell when the company announced the spinoff on Sept. 17 last year, but it saw a massive turnaround, rising 42.2 percent to 917,000 won as of Jan. 29, up from 645,000 won on Sept. 17.

“LG Chem’s battery business is already making profits before its IPO. However, Hyundai Heavy’s plan to raise 1 trillion won for future investments still requires more time to see how the company will use money and how the investment will turn into profits.”

KSOE’s consolidated operating profit in the first three quarters of last year stood at 255.3 billion won. When KSOE is calculated alone, however, the operating loss reaches 11.32 billion won during the same period, meaning KSOE’s current share price is highly affected by its affiliates.

This also leads to the question over the group’s own valuation of Hyundai Heavy. As the group said it seeks to raise 1 trillion won by issuing new Hyundai Heavy shares accounting for 20 percent of the total, this means the company sees Hyundai Heavy’s total value at 5 trillion won, according to analysts.

This valuation appears to be based on optimism for the global shipbuilding market. Clarksons Research, a market research firm, expects global shipbuilding orders for this year will reach 23.8 million compensated gross tons, which is up 23.7 percent from a year earlier.