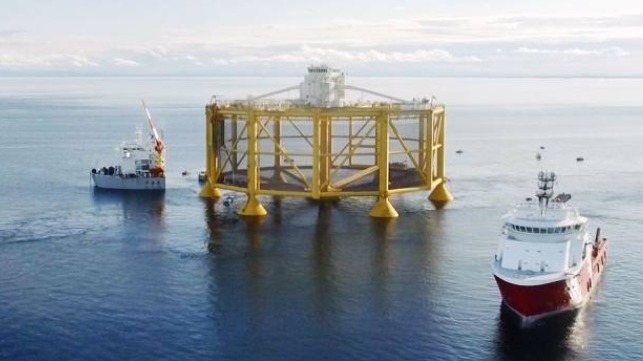 Light Structures AS, a supplier of hull stress monitoring systems, is rolling out a novel application of its sophisticated technology. Its fiber-optic systems provide onboard hull stress status to navigators on the bridge, allowing them to make decisions in real time about the forces on the vessel’s structure. This technology can be found on the U.S. Coast Guard’s fast response cutters, the U.S. Navy’s aluminum-hulled fast transport USNS Spearhead, and hundreds of tankers, LNG carriers and cargo vessels belonging to some of the industry’s top shipping companies.

On Monday, Light Structures announced that it will be rolling out a new version of its system on the world’s first offshore fish farm. SalMar’s Ocean Farm 1, a pilot facility off the west coast of Norway, is a cylindrical net enclosure built out of large-diameter steel tubing. It has the appearance of an offshore installation, and it was designed to comply with the same industry-standard structural requirements. After construction at CSIC’s yard in Qingdao, it was installed offshore in Frohavet, the semi-enclosed area between Norway’s Froan archipelago and the Trondelag county mainland.

According to SalMar, initial results from the facility are promising. The firm wants to expand on the project with similar installations off Norway’s coast, permit approvals allowing, and (eventually) with new partnerships overseas. It announced last month that it has reached an agreement with Norwegian offshore company Aker ASA to start a global offshore aquaculture venture, SalMar Aker Ocean AS, drawing on both companies’ digital capabilities and technology.

That technology now includes stress monitoring for SalMar’s novel offshore structure. The new stress information obtained by the monitoring system will be analyzed by class society DNV, and it will help inform the company’s ambitious plans for future developments.

In order to gather precise structural stress and fatigue data, SalMar contracted with Light Structures to design and install a fiber-optic monitoring system on Ocean Farm 1 in August 2021. The decision to use Light Structures’ equpment – rather than traditional electro-mechanical monitoring – was driven by the accuracy, dependability and adaptability of the technology, SalMar said.

Delivery is scheduled for the end of September, with installation completed by early October. No hot work will be required, according to Light Structures.