How The Top Container Lines Manage Capacity And Profitability 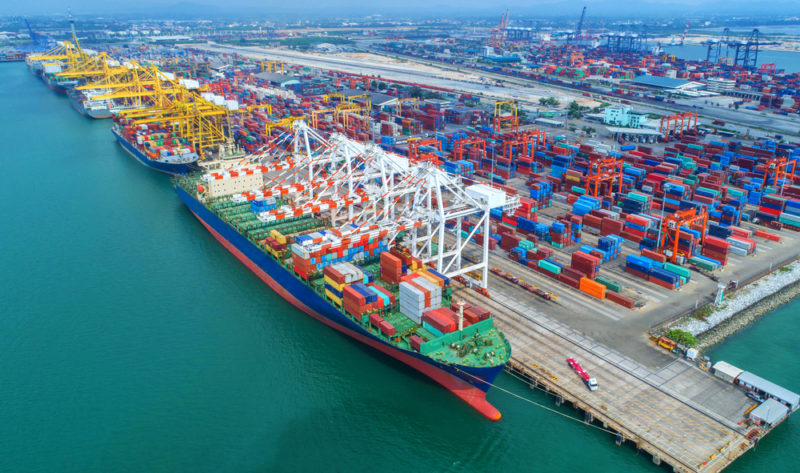 Up till the beginning of 2020, most shipping lines were absorbing losses on their books despite doing their best to increase vessel utilization percentages. Due to this, carriers have looked at other ways of reducing their costs further and increasing their margins.

The first way is through fuel consumption management, which makes up as much as 50 to 60 percent of a vessel’s operational expenses. The most popular way to do so is through slow-steaming which involves deliberately slowing down a vessel to reduce fuel consumption when prices are high. Slow-steaming is done when fuel prices are increasing which impacts the market with slower ship speeds and therefore longer transit-times which correspond to higher unreliability.

The second way is installing scrubbers, which are a one-time investment, instead of buying LNG or very low-Sulphur fuel on the spot market.

The third way is to blank sailings and roll over containers for a sailing if the vessel is under-utilized. Time and again, carriers have exhibited a tendency to proactively cancel sailings in advance and then later re-insert capacity if there’s more demand, rather than waiting for demand to increase first before making a decision to roll-over a sailing.

The fourth tactic is to idle ships at sea as part of capacity reduction efforts in a network to prop up freight prices. This allows carriers to quickly re-introduce capacity when demand surges.

The fifth tactic is actually the opposite of the first and works when fuel prices are dropping. This involves taking longer alternative sailing routings to bypass toll fees but speeding up ships. As a general rule, fuel consumption is directly proportionate to vessel speed increases by a power of three. An example of this is when shipping lines travelling between Asia-Europe on both directions decided to take the longer routing via the Cape of Good Hope in South Africa instead of the shorter route through the Suez Canal. The difference in extra distance travelled was approximately 3,500km. With bunker prices at all-time lows, the savings from burning cheaper fuel versus paying a $700,000 toll fee were tremendous. Furthermore, shipping lines were even willing to speed up and cut the additional transit time of 7 to 10 days on this route to 3.5 days.

When all else fails, carriers resort to scrapping ships that have not yet reached their maximum lifespans. Longer-term strategies include vessel operators adopting a more variable cost structure in their balance sheets through a greater proportion of leasing charters from third party owners as opposed to owning their own vessels. In bad times, such vessels can be easily returned to owners and the relevant sailing routes blanked accordingly.

Bunker-fuel hedging is another crucial strategy employed by carriers to manage fuel costs, but these costs are hedged only one way with their suppliers. The same hedging option is not extended to their shippers, resulting in beneficial cargo owners having to rely on monthly bunker variances as a component of their freight costs. This leaves shippers very little alternative but to ride the market volatility through the peaks and troughs.

However, when bunker fuel levels hit zero and even went into historic negative territory of USD -$38.45 /barrel3 in April of this year, the shipping lines were slow and reluctant to pass on those savings to their clients. Instead, they re-adjusted their bunker trade factor calculations and formulae to maintain their margins.

A quick note on how these formulae are derived: the premise for calculations are not a simple matter as it involves the division and allocation of the total fuel consumption costs of both legs of a particular carrier sailing loop. Both the head haul and back haul routings of a sailing loop must share the fuel burden, but by how much depends on the shipping line’s own calculations. These calculations weigh the individual fuel costs, vessel profitability and volume of each haul against what their competitors are doing. This makes it difficult to coordinate a standard industry bunker formula because each carrier has varying cost inputs – and also of course because of market regulation laws that prevent any form of collusion.

The different formulae factors have naturally led to large rate differences and much confusion amongst shippers. In an effort to clear up this confusion and make things as easy as possible, some large forwarders have developed their own bunker formulae on monthly rolling averages to bring more transparency and predictability into the industry.

The effect of carriers re-adjusting their bunker formulae in crises, though not unexpected, had an unsettling effect on customer expectations of long-term contract rates. It was yet another salvo fired against the integrity of long-term contracts—though most of these contracts were never iron-clad to begin with—between shipping line and shipper to buffer against the shocks of rate volatility. This brings into question the very intent and purpose of having a long-term contract to guard against such fluctuations in the first place.

Shipping lines have employed all kinds of ways to safeguard against losing money on a contract that has turned negative. (A negative contract is a contract that will result in financial loss for the carrier due to market fluctuations.) This includes citing lack of space and equipment availability at the time of booking, thereby allowing them to turn down a booking which would result in a loss. This is a default clause in almost all contracts. In the early days of the pandemic, force majeure clauses were frequently cited and used to break away from previously agreed long-term contracts.

A combination of these measures during and outside of crises allows shipping lines to mitigate all and any downside on a negative contract. However, it is not to say that all such contracts are one-sided. An example of a common and fair two-way standard clause allows carriers/shippers to re-negotiate the rate levels if variances move up or down by 10 percent.

Freight rates are fleeting and volatile, but any supply chain director or procurement chief worth their salt knows getting a long-term partnership with the right forwarder or shipping line on the basis of trust and transparency will save them and their organization more money, time, effort, and trouble than they could ever imagine.
Carrier tactics at managing profitability have resulted in increasingly unreliable transit times for shippers, notwithstanding the fact that many carriers have dabbled with insolvency or rumours of it in the past. Some carriers can continue along this path of unprofitability because they have been continuously propped up by vested government and nationalist interests, but it remains to be seen for how long and through what kind of market cycles such policies can continue.

Shipping line profitability remains inherently unstable and will continue to be so until more capacity rationalization occurs through mergers and acquisitions, a reduction of new vessel build orders, or a twofold increase in global market growth. the last of which is highly unlikely due to the pandemic.

The effect of a consolidating carrier market has a mixed-effect on the global forwarder market. On one hand, it brings about stability to the industry – which is a good thing because that translates into higher transit time reliability, which is ultimately beneficial to shippers. Consolidation also means lesser carrier vendors, which results in higher freight rates. This is not necessarily a good thing for shippers but it’s a trade-off for an inherently stable and reliable service. If shippers could be assured a higher freight rate would translate to less volatility and more predictability for their supply chains, they may be more receptive to such increases.

On the other hand, a shrinking pool of carriers is not good for shippers and forwarders because the lack of competition means a lack of diversified routing choices and reduced bargaining power. All said, there is appetite and room for more consolidation when the worst of the pandemic is over if an enticing deal can be found.