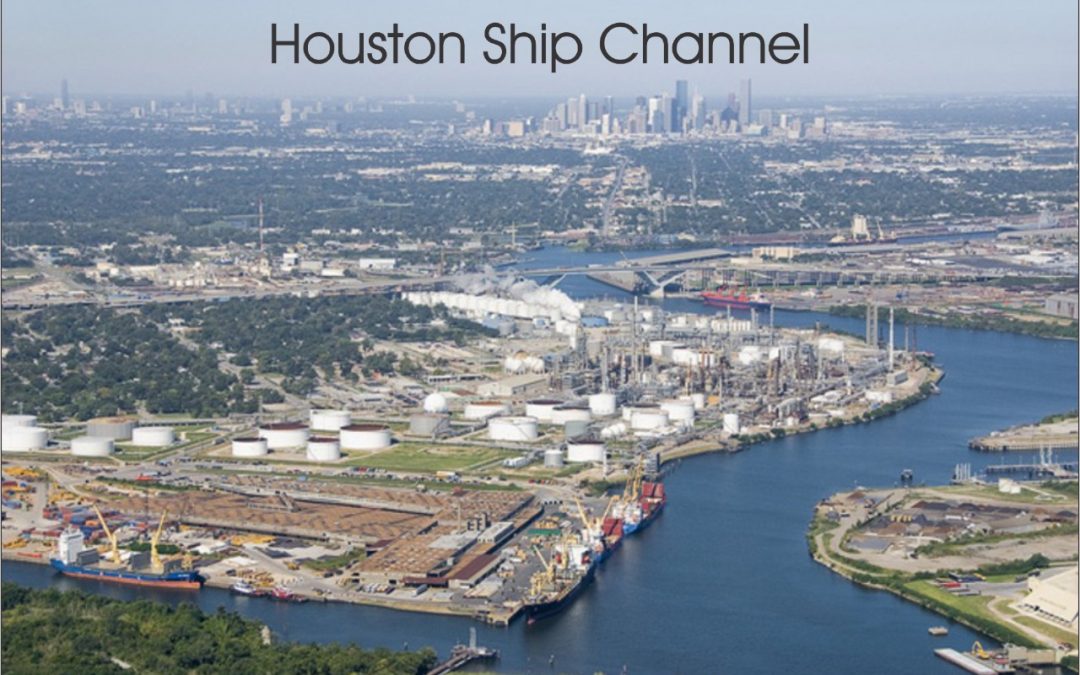 Opened in 1914, Houston Ship Channel, one of the busiest waterways in the United States connects Houston, Texas, with the Gulf of Mexico, passing through the former Buffalo Bayou and Galveston Bay.

Currently, the 50-mile-long channel is 40 feet deep with a minimum width of 300 feet and works without locks. The original channel was widened and deepened by dredging the Buffalo Bayou and Galveston Bay, only to further open Houston to the world of prosperity.

With a number of terminals as well as berthing locations, the Houston Ship Channel witnesses a significant volume of inland barge traffic. This is why it is considered as one of the vital man-made shipping channels.

Earlier, Buffalo Bayou, a shallow draft consisting of swampy, marshy, and overgrown with dense vegetation, was used to carry cargo, from the foot of Main Street along a long and winding distance to the Gulf of Mexico. However, it only allowed the passage of smaller steamboats or shallow draft-boats and barges. Being the sole waterway in Texas, many planters over a large area brought their cotton to Houston to be shipped by barge or riverboat to Galveston. From there, these barges met the seagoing vessels that brought cargo to and from the rest of the nation and overseas. This became the most travelled route in Texas not just pre-rail-road era but even later.

Further, with the increasing demand for cargo, having a deep-water port became necessary. Recognizing the potential of the channel, the Port of Houston on Buffalo Bayou, the man-made port for ocean going vessels, was soon established. Permission was granted to remove obstructions and otherwise improve the bayou. A fun fact here is that, after Texas entered the Union, free wharfage was given to boat-owners who contracted to keep the channel clean.

Later on, in 1869 they organized the Buffalo Bayou Ship Channel Company to improve the channel, and in 1870 they persuaded Congress to make Houston a port of delivery. They even dredged a channel from Galveston Bay to the site of present Clinton near Houston. The first ocean vessel arrived there on September 22, 1876.

Towards the 20th century, with the discovery of oil and crops such as rice beginning to rival cotton exports, the Texas commerce accelerated and many leaders again emphasized on the need of a deep-water ship channel. In September 1900, a hurricane slammed into Galveston, leaving behind one of the worst natural disasters in American history. This created a need for a protected port 52 miles upstream from Galveston’s exposed position.

Nevertheless, after multiple attempts, the work on the deep channel finally commenced in 1912 and was completed successfully on September 7, 1914. Unfortunately, the channel inauguration was delayed due to the World War I but finally in 1919 an ocean-going vessel, the Merry Mount, took the first shipment of cotton directly from Houston to a foreign market.

Moving on, petroleum, crude oil and development of synthetic rubber led to the industrialization of the waterfront. Although the Great Depression briefly interrupted the progress, the Port of Houston ranked third in the nation in the amount of tonnage carried on the eve of World War II.

The progress continued even post-war. In 1945 congress approved to widen some parts of the channel to 300 feet, and in 1957 army engineers recommended that the entire channel be deepened to forty feet.

This turned out to be extremely profitable not just economically, but it also created employment opportunities in the channel-side industrial complex. By the 1970s 4,500 ships flying the flags of sixty-one nations passed through the channel annually. Currently, the Houston region, the country’s No. 1 region for exports, is home to the largest petrochemical manufacturing complex in America. In 2018 alone, it handled more than 200 million short tons of international cargo.

The channel facilitates a safe passage for two way traffic and the navigational head of the channel, the most upstream point to which general cargo ships can travel, is at Turning Basin in east Houston. The channel also has five vehicle crossings: Washburn Tunnel, Sidney Sherman Bridge, Sam Houston Ship Channel Bridge, popularly known as the Beltway 8 Bridge; Fred Hartman Bridge connecting La Porte and Baytown, Texas; and Lynchburg Ferry.

However, environmentalists noted an increase in pollution in the area due to events of oil spills, explosions, and collisions between tankers, etc. and some believed the Channel Industries Mutual Aid, formed in 1955, offered insufficient protection in case of accidents along the waterway. Additionally, as the 90 percent of all poisonous cargo traveling by water passed through the channel, new plans to widen the channel were proposed, along with new industrial tracts and petrochemical projects, but remained to be implemented. Although unusual, the channel remained closed recently in February 2021 due to extremely freezing temperatures. Regardless of this, the channel continues to be one of the most used shipping channels in the country.