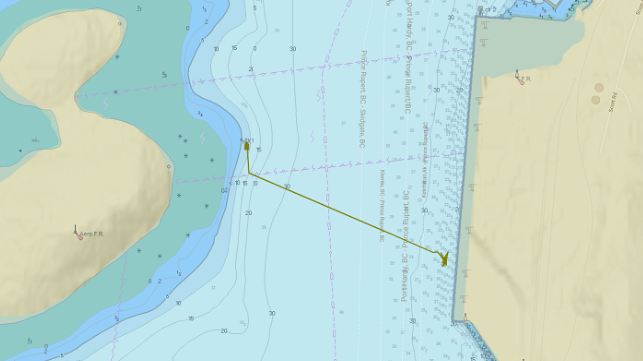 Just one week after severe weather from an atmospheric river system destroyed the Port of Vancouver’s rail connections to Canada, a similar weather event has struck the port of Prince Rupert, B.C. In addition to rains, this second weather system brought high winds of up to 60 knots, tearing down power lines, threatening damage to the regional hospital’s roof and delaying service for BC Ferries.

The wind also tore the boxship MSC Altair loose from her moorings and sent her drifting across the bay to nearby Digby Island, where she briefly ran aground.

A team of tugs from towage provider SAAM Smit Towage responded to the stricken vessel and quickly pulled her off the bottom.

“Multiple tugs have refloated the vessel, and it is now under its own power and will be moving to anchorage,” a spokesperson for the Prince Rupert Port Authority told the local Northern View.

The vessel was relocated to the port’s outer harbor with a tug escort and a pilot on board. She has since returned to her berth at the port’s container terminal.

No pollution, injuries or cargo loss were reported in the incident, and it is not believed that the vessel sustained any significant damage.

The port of Prince Rupert is a critical gateway for Canada-bound cargo. With a dedicated intermodal rail connection into the heartland, it handles hundreds of thousands of containers per year, along with a variety of bulk and breakbulk cargoes. After the storm damage to Port of Vancouver’s rail and highway links, Prince Rupert’s importance as an alternative has increased, and its terminal operators have been working with shippers to help handle Vancouver-bound cargo.