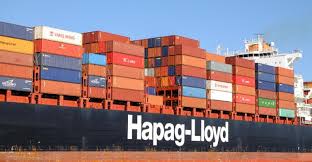 The $ 1 billion investment will see the LNG-powered 23,500+ TEU vessels delivered to Hapag-Lloyd between April and December 2023.

The vessels will be fitted with fuel-efficient high-pressure dual-fuel engines, that will operate on LNG, but they will have alternatively sufficient tank capacity to operate on conventional fuel, the company said.

Hapag-Lloyd added that the financing for the massive investment has already been secured.

“With the investment in six ultra large container vessels we will not only be able to reduce slot costs and improve our competitiveness on the Europe – Far East trade, but also take a significant step forward in modernizing our fleet. Additionally, we will further reduce our environmental impact,” Rolf Habben Jansen, CEO of Hapag-Lloyd, said.

The vessels will be deployed on the Europe – Far East routes as part of THE Alliance.

The German boxship owner revealed intentions to order new ULCVs at the beginning of this year, saying orders would be most likely be placed until 2021 as the company needed to start rejuvenating its fleet with more efficient and eco-friendly vessels.

However, with the outbreak of COVID-19 and its massive impact on the container shipping sector, the company delayed the decision on ordering until further notice due to the market uncertainty.

Despite market volatility, container shipping majors have managed to stay in the black due to extreme capacity discipline aided by lower bunker costs and rising freight rates.

At the beginning of December, Hapag-Lloyd, like many of its counterparts, raised its earnings forecast amid better than expected business performance.

For the 2020 financial year, the company expects earnings before interest, taxes, depreciation and amortisation (EBITDA) of €2.6 to 2.7 billion, from the previously announced €2.4 to 2.6 billion. Earnings before interest and taxes (EBIT) were raised from EUR 1.1 to 1.3 billion to €1.25 to 1.35 billion.

The investment in LNG-powered giants comes on the back of Hapag-Lloyd’s first conversion project of an LNG-ready ultra-large containership to LNG.

The project was originally planned to start in May this year. Nevertheless, the retrofit was delayed due to the COVID-19 impact, marking its official start on September 2.

The conversion is expected to cost around $35 million and is slated for completion by the end of the year.

The project is the core of Hapag-Lloyd’s sustainability strategy, as using LNG has the potential to reduce CO2 emissions by 15 to 30 percent and sulphur dioxide and particulate matter emissions by more than 90 percent.

The Sajir is one of the 17 vessels in Hapag-Lloyd’s fleet that were originally designed to be LNG-ready. The first conversion project is expected to lay the groundwork for the potential additional retrofits.

Therefore, the newbuild order can be seen as a vote of confidence in LNG as the likely bridging fuel of the future in the maritime industry as the sector aims to decarbonize.

The French major has already taken delivery of three of nine LNG-powered ULCVs.