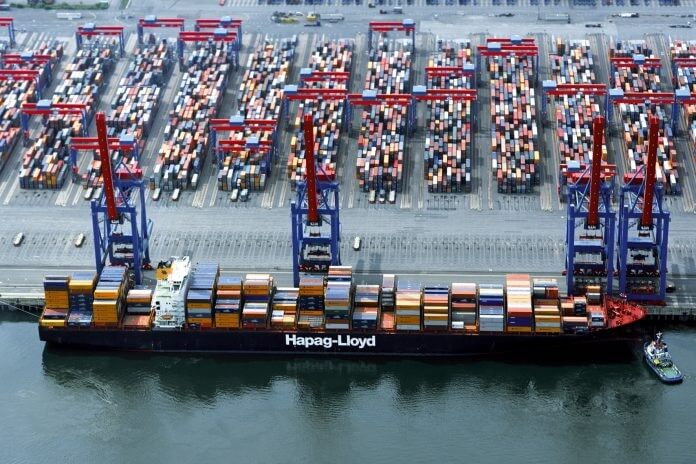 German container shipping company Hapag-Lloyd wrapped up the first nine months of this year with significantly higher earnings than in the corresponding period last year.

The EBIT was also much higher than in the prior-year period and amounted to $6.9 billion, compared to $965 million in the first three quarters of 2020.

At the same time, the group profit improved to $6.7 billion from $605 million recorded in the nine-month period last year.

Revenues rose in the first nine months of 2021 by approximately 70 percent, to $17.9 billion from $1.1 billion reported last year. As explained, the rise can primarily be attributed to a higher average freight rate of 1,818 $/TEU (9M 2020: 1,097 $/TEU). This significant increase is mainly the result of persistently high demand for container transports with scarce capacities at the same time. In addition, transport volumes were up to 8,980 TTEU and thereby 3 percent higher than the comparable figure for the previous year.

Transport expenses climbed 16 percent in the nine-month period, to $8.9 billion. This was due in part to higher costs for container handling and an increased average bunker consumption price, which stood at $452 per tonne in the first nine months (9M 2020: $402 per tonne), according to Hapag-Lloyd.

“Despite all the operational challenges, we achieved an extraordinary strong nine-month result. However, global supply chains are under enormous pressure, which further intensified during the peak season in the third quarter. This unfortunately also creates additional operational burdens for carriers, ports and terminals – but, most importantly, for customers worldwide,” Rolf Habben Jansen, CEO of Hapag-Lloyd, commented.

“We will do everything in our power to help with suitable offers and to do our part to resolve the situation through targeted investments and flexible capacity management.”

Looking ahead, Hapag-Lloyd expects that earnings momentum will also remain at a high level for the rest of the year.

The publication of the financial results for the first nine months of this year coincided with the appointment of the company’s new Chief Information Officer (CIO).

As informed, the Supervisory Board of Hapag-Lloyd AG appointed Donya-Florence Amer to the Executive Board. On 1 February 2022, she will join the company as Chief Information Officer.

Amer, 49, started her professional career in 1999 at IBM, where she held various management positions. She has played leadership roles at Bosch since 2017, initially as Executive Vice President and as a member of the CIO Management Board. Since 2020, she has been the CEO of Bosch Climate Solutions, of which she was a co-founder.

“By bringing Donya-Florence Amer on board, we have been able to secure for ourselves a highly qualified expert in the field of information technology and digital business modelling,” Michael Behrendt, Chairman of the Supervisory Board of Hapag-Lloyd AG, said.

“The Supervisory Board is firmly convinced that, with her extensive experience, she will provide us with invaluable support in the ongoing implementation of our digitisation strategy.”

In addition, Amer will be the first woman to serve on the company’s Executive Board in its then-175-year history.