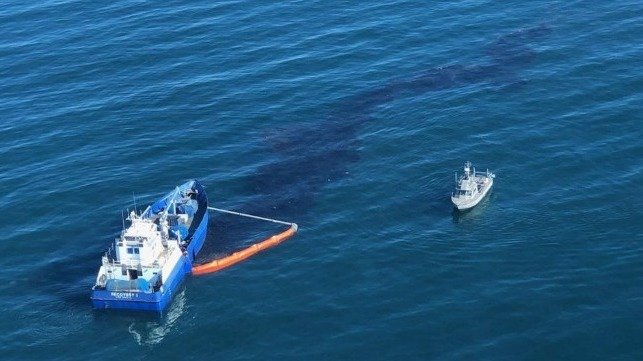 The U.S. Coast Guard has considered and reportedly set aside the possibility that the boxship Rotterdam Express was responsible for the San Pedro Bay Pipeline oil spill off Orange County, California. After a port state boarding and an examination of her logbooks, the vessel has been released and allowed to proceed to her next port of call, according to operator Hapag-Lloyd.

On Wednesday, the Associated Press reported that AIS data from MarineTraffic appeared to show the Rotterdam Express passing over the affected area of the pipeline three times. Hapag-Lloyd vigorously denied that the AIS data reflected the vessel’s true position, and after the Coast Guard boarding, a company spokesman said that the ship was “no longer under investigation.”

The pipeline spilled about 125-145,000 gallons of crude oil into San Pedro Bay over the weekend, and oil has been washing up on Orange County’s beaches and wetlands ever since. About 800 people are involved in cleanup efforts and more than 5,000 gallons of oil have been recovered.

Federal, state, and local law enforcement officials have launched a criminal investigation into the spill, centered on pipeline operator Beta Offshore and its parent company Amplify Energy. The inquiry follows revelations that the pipeline’s operator may have waited more than three hours in between the time of the first low-pressure alarm and the time of pipeline shutdown. The first alarm sounded at 0230 on Saturday; shutdown occurred at 0601, and regulators were notified at 0907.

This timeline does not appear to be consistent with previous public statements from Beta’s parent company, Amplify Energy; at a press conference Tuesday, Amplify CEO Martyn Willsher told the OC Register that his firm became aware of the potential leak at about 0800 – more than five hours after the alarm and two hours after his firm had shut down the pipeline.

Amplify is part of the unified command managing the spill response effort, as is customary for a significant marine casualty, but Orange County District Attorney Todd Spitzer has asked the Coast Guard – the lead agency and Federal On-Scene Coordinator – to stop appearing in public with Amplify officials and to cut Amplify out of the process of examining the pipeline.

“We don’t let criminals conduct their own investigation into their crimes – why would we allow the owner of the oil pipeline to conduct its own investigation into the oil spill?” Spitzer said in a social media post. “Our beaches and coastline are what draw people from around the world to Orange County and the people responsible for endangering our wildlife and marring our picturesque beaches and shorelines must be held accountable.”

Late Thursday, the U.S. Coast Guard announced that it will treat the spill as a major marine casualty, citing the possible involvement of a vessel and the severity of the resulting economic damages. The decision puts the USCG in the lead of a marine casualty investigation, with support from NTSB, PHMSA, BSEE, and the California Department of Fish and Wildlife. NTSB is conducting its own parallel inquiry.