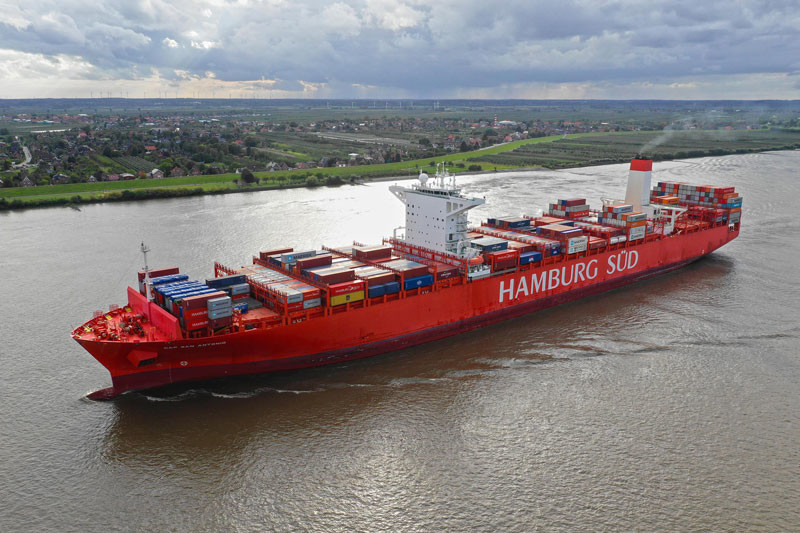 Dramatic images appeared on social media as a Hamburg Sud-operated boxship scraped along a ferry pier on Sunday, June 20 in Santos, Brazil. Frightened employees of the ferry company can be heard calling out and moving away as the big box ships pulled away portions of the ramps from the ferry landing.

The 10,300 TEU Cap San Antonio was departing the port of Santos, Brazil for a short run to Paranagua Sunday afternoon. The 128,650 dwt vessel, which is registered in Denmark and owned by Maersk, was sailing empty with only a few boxes aboard and apparently mostly with ballast. The vessel scraped along the seawall, causing a small hull breach and creasing to port side hull plates. As it moves away from the dock, ballast water can be seen rushing through the breach.

Hamburg Sud confirmed in a statement that the Cap San Antonio was involved in an incident when leaving the port complex. “So far there is no record of victims involved in the incident, on or off the ship, or that the region has been polluted in any way. The company is evaluating the situation and collaborating with the authorities.”

The ferry landing on the Guaruja side of the waterway was badly damaged and ordered closed for a time while authorities inspected the damage. A portion of the loading ramps collapsed and according to local media reports were dragged by the container vessel into the harbor. Service resumed on the ferry, but passengers were posting pictures of long waits and reporting delays today due to the damage in the Guaruja area. Pictures showed long lines of cars waiting to load on the ferries.

Port officials said the harbor had remained open and said they would investigate the circumstances of the accident along with the Navy. They said the weather at the time had not been impacting navigation, although they later reported wind gusts nearing 40 miles per hour.