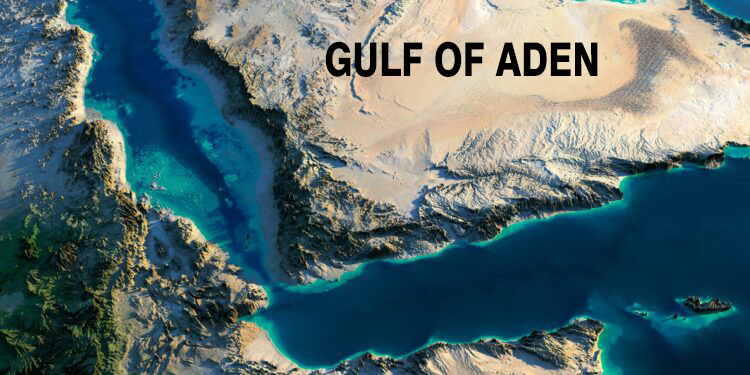 The last one on our list of dangerous shipping routes is the Gulf of Aden, widely known for piracy. The Gulf of Aden, which was also known as the Gulf of Berbera is a deep-water basin that forms a natural sea link between the Red Sea and the Arabian Sea. The Gulf of Aden is named after Aden, a port city in Yemen and the city has significance for being thought of as the birthplace of Cain and Abel.

The Gulf of Aden is an extension of the Indian Ocean, tucked between the Arabian Peninsula and the African continent. The gulf connects the Red Sea to the Arabian Sea via the Strait of Bab el Mandeb. It has a long history as part of the Erythraean Sea and a critical oil shipping route linking the Far East and Europe and also a critical part of the Suez Canal shipping route, which connects the Red Sea and the Mediterranean Sea.

The Gulf of Aden is majorly shared between 3 neighboring nations- Djibouti to the East, Somalia to the South, and Yemen to the North. It is approximately 900 km long and 500 km wide and covers roughly 410,000 square kilometers. It has an average depth of 500 meters and a maximum depth of 2,700 meters. The water temperature ranges from 59 degrees Fahrenheit to 82 degrees Fahrenheit, depending on the monsoons and seasons. The salinity varies from 35.3% to 37.3%.

The gulf’s marine life is rich in both the quantity and the variety of its species. Seasonally variable upwelling of waters in the coastal zone provides the surface layer with a considerable supply of nutrient elements, which produce an abundant growth of plankton. Sardines and mackerel abound in these areas of upwelling. The fish that are mainly found are dolphins, tuna, billfish, and sharks. Whales are frequently sighted. The gulf is a breeding ground for sea turtles, and rock lobsters are abundant.

Despite a lack of large-scale commercial fishing facilities, the coastline supports many isolated fishing towns and villages. Local fishing takes place close to the shore; sardines, tuna, kingfish, and mackerel make up the bulk of the annual catches. Crayfish and sharks are also fished locally, while survey ships have occasionally pulled in exceptional catches of fish.

Up to 30,000 ships pass through the Gulf of Aden each year, heading to and from the Suez Canal.

Millions of tonnes of crude oil, petroleum products, gas and dry commodities such as grains, iron ore, and coal, as well as containerized goods are ferried through the Gulf of Aden and Suez Canal every month.

Major operators of the world’s merchant fleet, carrying 90 percent of the world’s traded goods by volume have bypassed the Gulf of Aden and Suez Canal altogether. Industry experts say the alternative trade route, round South Africa’s Cape of Good Hope, would add three weeks or more to a typical journey, pushing up the cost of goods which makes it a vital route.

The major threat in these waters has been piracy, Somalia remained the biggest problem with pirates operating off the country’s shore accounting for 49 of the 52 ships seized last year, an official at the reporting center of the International Maritime Bureau in Kuala Lumpur said. The London-headquartered IMB said 1,181 crew members were taken hostage, a record high since the bureau started monitoring piracy in 1991.

In 2000 suicide bombers rammed an explosives-laden rubber raft into the U.S. destroyer Cole in the port of Aden, Yemen, killing 17 U.S. sailors.

Two years later, the French-flagged tanker Limburg, carrying 400,000 barrels of oil off the coast of Yemen, was bombed and holed. That attack caused insurance premiums for Yemeni ports to triple immediately.

But since 2013 it has steadily declined due to private security and international navy patrols. India receives US$50 billion in imports and sends US$60 billion in exports through this area annually. Due to this, and for the sake of protecting the trade of other countries, India keeps a warship escort in this area.

Combined Task Force 150, Combined Task Force 151, and EU naval task force operating under Operation Atalanta are three international task forces that compose the bulk of counter-piracy operations. All counter-piracy operations are coordinated through a monthly planning conference called Shared Awareness and Deconfliction (SHADE).  Originally having representatives only from NATO, the EU, and the Combined Maritime Forces (CMF) HQ in Bahrain, it now regularly attracts representatives from over 20 countries.