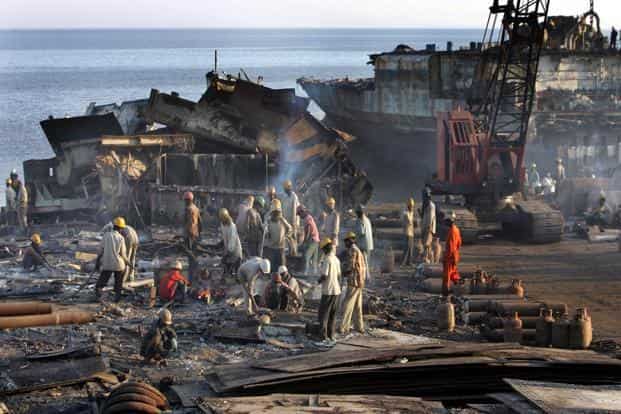 Units functioning at Asia’s biggest ship-recycling yard in Gujarat are facing a set of three problems — higher cost of adhering to safety and pollution norms, higher charges from regulator Gujarat Maritime Board (GMB), and the continuous depreciation of the rupee against the US dollar.

It has become extremely difficult for Indian ship recyclers to compete with their counterparts in Bangladesh, who don’t have to spend much for adhering to stringent norms. “We feel that the Indian ship-recycling industry is paying the price for adhering to stringent safety and pollution norms. Since recyclers in the neighbouring country are not spending much on such norms, they are able to purchase vessels coming for dismantling at higher prices,” lamented Haresh Parmar, secretary of the Ship Recycling Industries Association of India (SRIA).

Parmar, however, says that Alang-based ship recyclers don’t mind adhering to safety and pollution norms, but the GMB should give them relief in the current situation to support local recyclers. “GMB is taking heavy charges of housing cess and rental of plots where activities related to dismantling of vessels happen, forget doubling the capacity of Alang shipyard as per the Central government’s plan,” says Parmar, adding that recyclers wouldn’t be able to utilise even 50% of the existing capacity if they do not get relief.
Alang-based ship recyclers have complied with the regulations of the Hong Kong Convention 2009 and Ship Recycling Code 2013, related to hazardous waste management and workers’ safety, in anticipation of attracting vessels from Europe and the US. Still, most vessels complete their last journeys either to Turkey or China-based recycling yards. Vessels slated for dismantling from other countries generally come to South Asia’s recycling yards, but over the past 5-6 months, recyclers belonging to Bangladesh have won bids by offering higher prices.”Generally, 20 to 25 ships come every month at Alang’s recycling yard, but since the past two months, hardly six ships have been dismantled here,” said Parmar. In the past four months, hardly 35 ships arrived at Alang for dismantling, he claims.

“Even in the current month, we are expecting hardly 5-6 ships to arrive at Alang’s ship recycling yard. Prices of ships have gone up drastically as ship recyclers have to pay $500-$600 per tonne, considering the weakening rupee against the dollar (around `80 per dollar). In anticipation of further depreciation in the rupee against the dollar, most ship recyclers are cautious about buying ships for dismantling purposes,” he said.

The Central government’s decision on imposing duty on iron ore is also posing a challenge for the ship-recycling industry. Further, the government has reduced import duty on finished steel goods, which has only aggravated difficulties for ship recyclers in India. As per the data of the GMB, 209 ships were dismantled at Alang during 2021-22, compared to 187 ships during the previous financial year. But in FY23, hardly 35 ships have been dismantled so far during the first four months. More than 150 recycling units provide direct employment to over 20,000 workers.