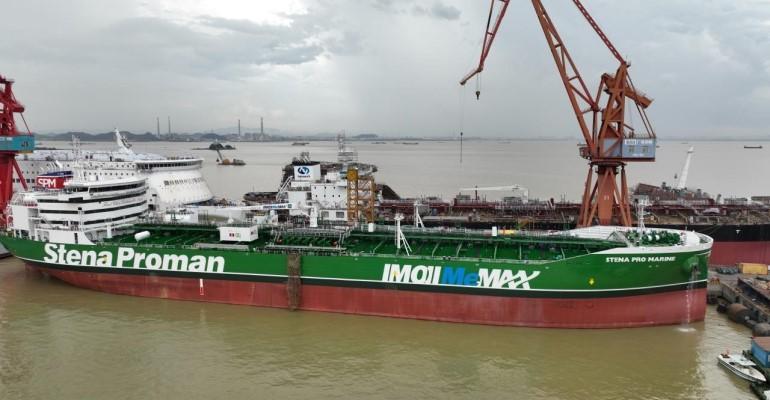 GSI also celebrated the delivery to Proman Stena Bulk of Stena Pro Marine, the second in a series of three methanol-fuelled tankers for the owner. The 49,990 dwt tanker joins recently delivered Stena Pro Patria; another vessel is due for delivery this year and an order has been placed for three more ships of the same design.

GSI vice president William Zhou said: “This is one of the best periods in GSI’s history. I would like to pay tribute to all our team and suppliers here at GSI who have worked so hard with our clients Eastern Pacific and Stena Proman to deliver these magnificent ground-breaking vessels.”

“These are some of the most innovative propulsion systems in the world and we are proud to be changing the shipping industry for the better, working with our customers, to help make shipping greener.

Zhou said the Stena Proman ships can go a long way to showcasing how methanol can be deployed safely and at low cost.

“The systems are less complicated than those of LNG and LPG-fuelled vessels. As soon as classification societies drafted rules on using methanol as fuel, GSI began to get involved and it is wonderful to see the first two ships built and delivered. We expect to see many more shipyards embracing methanol ships now, but we are very proud to be one of the first.”

Zhou added that GSI has ambitions beyond its current designs.

“Our team is looking at not just methanol but also ammonia, bio-methane and hydrogen. We believe these will all have their place in the future and GSI is at the cutting edge of developing these technologies, having secured approvals in principle from class societies,” said Zhou.