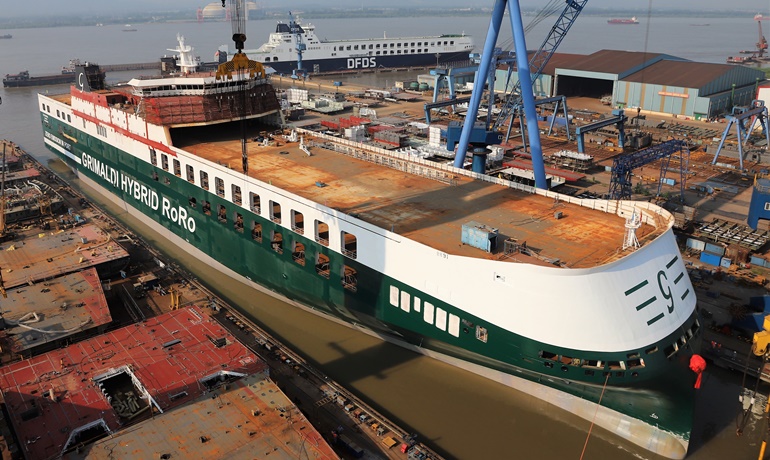 Eco Livorno, the third of twelve hybrid vessels of the Grimaldi Green 5th Generation (GG5G) class, has been delivered to the Grimaldi Group by the Chinese Jinling shipyard located in Nanjing.

The Eco Livorno, which flies the Italian flag, has a length of 238 meters, a beam of 34 meters, a gross tonnage of 67,311 tonnes and a service speed of 20.8 knots, making the GG5G-class ships the largest short sea ro-ro vessels in the world.

The loading capacity of Eco Livorno’s seven decks – two of which are hoistable – is twice that of the previous class of short sea ro-ro ships deployed by the Grimaldi Group. The vessel can carry 7,800 linear meters of freight, equivalent to around 500 trailers and 180 cars.

At the same speed, the Eco Livorno consumes the same amount of fuel compared to the previous generation vessels and is, therefore, able to halve CO2 emissions per unit transported.

During port stays, the Eco Livorno is capable of cutting emissions to zero by using the electricity stored in mega lithium batteries with a total power of 5 MWh, which are recharged during navigation thanks to shaft generators and 350 m2 of solar panels.

In addition, the vessel is equipped with electronically controlled engines and with an exhaust gas cleaning system for the reduction of sulphur and particulate emissions.

“We are in the midst of a green revolution that our Group has strongly promoted and in which it has been investing for years, and we are proceeding swiftly in this direction”, said the Neapolitan company Managing Director Emanuele Grimaldi.

Once she arrives in Italy, by the end of February, the Eco Livorno will join her sister vessels Eco Valencia and Eco Barcelona on the regular ro-ro service that connects the ports of Livorno, Savona, Barcelona and Valencia.

The Grimaldi Group, headquartered in Naples, operates a fleet of over 130 vessels and employs approximately 16,000 people.