Greig And Wartsila Proceeding With Ammonia Carrier Due To Launch 2024 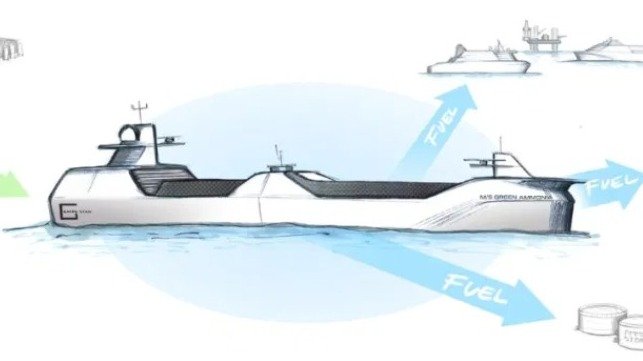 A Norwegian project to design and build one of the world’s first ammonia-fueled, ammonia tankers is proceeding with the partners detailing a timeline that would see the vessel in service on the Norwegian coast in 2024. Greg Edge, the technology arm of shipping company Greig Maritime Group and Wartsila received government funding for the project at the end of 2020 and now are proceeding to the design stage of the future vessel.

Grieg Edge has entered a contract with naval architect company LMG Marin to design the MS Green Ammonia. After a thorough process, Grieg Edge decided to bring the Bergen, Norway-based naval architect and ship designer to the ship’s design process based on the firm’s work with innovative concepts. In addition to the ammonia carrier, LMG is also working with Norled for the hydrogen-ferry Hydra.

Their concept is to have the MS Green Ammonia distribute green ammonia from the planned factory in Berlevåg located at the northernmost reaches of Norway on the Barents Sea to various locations and end-users along the coast. When they announced the project a year ago, Greig said concrete design, size, and volume were all elements that were dependent on the market and end-users. The project, however, has already established LOIs with several heavyweight industrial partners and expects to target the owners and operators of LNG-fueled vessels as early adopters for ammonia.

“We see a strong interest from owners of ferries, offshore supply ships, fishing vessels, and from energy-producing companies. In total, they require an amount of energy surpassing what we can achieve in this project. The market is there without a doubt,” said Chief Business Development Officer in Grieg Star Group, Vidar Lundberg.

Together, the team plans to spend the next few months developing different conceptual ideas for MS Green Ammonia, before they settle on a chosen concept design. The target is to get an Approval in Principle (AIP) from a class society by the end of the first half of 2022. With an AIP in place, detailed engineering will commence during the summer of 2022, with a scheduled launch of MS Green Ammonia in 2024.

The Norwegian funding scheme Pilot-E, set up by the government to encourage environmental innovation projects, confirmed in December 2020 that it awarded $5.1 million to the ammonia project being run by Grieg Edge and Wartsila.

Many of the efforts to develop ammonia-fueled ammonia carriers has been progressing in Japan and South Korea. The Asian shipbuilders have been developing designs for larger ocean-going ammonia carriers while in Norway much of the focus has been on ammonia as the fuel for bulkers, cargo operations, and the tanker operating along the country’s coastal routes.