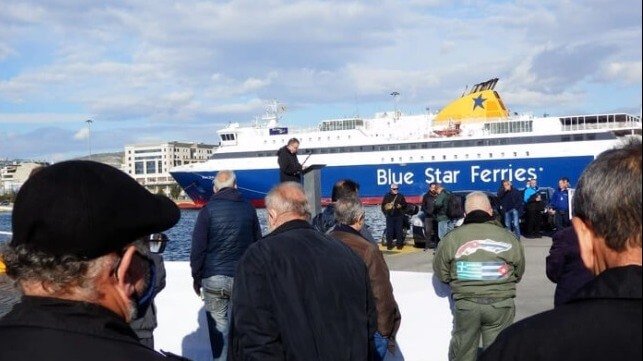 The union representing Greek seafarers late on December 13 announced that it had agreed to a new collective bargaining agreement with Greek shipowners bringing to end a strike that had been disrupting ferries between the islands and mainland. The strike had started on December 10 and was later extended as the union accused the shipowners of stonewalling and taking a negative position in the negotiations.

Earlier on Monday, the Panhellenic Seaman’s Federation staged a demonstration in Piraeus, Greece saying to members, “Our struggle, which is a continuation of our previous strikes, with which we fight and demand the signing of an agreement with substantial increases. Our ongoing struggle is not a ‘normal’ strike, but concerns our essential existence as sailors and workers.”

The union was demanding wage increases as part of the two-year contract. They also had a long list of grievances including relating to insurance, pensions, education, unemployment, undeclared work, and other issues. The union said that seafarers did not receive any increases for the years 2020 and 2021, with their last increase being one percent in 2019, They said the shipowners association had proposed no increase for 2020 and only one percent for 2021 and not making the increase retroactive.

The latest strike over the lack of a contract was called for 48-hours beginning at midnight on December 10. It caused many of the shipping lines including Blue Star Ferries and Hellenic Seaways, to warn customers that service would be suspended or greatly reduced. Many of the ferries were idle in the harbor cutting off the islands from the mainland. The union later announced that it would extend the strike through December 12 and 13 saying that it would end at midnight on Monday although there were concerns that they might move to again extend the strike into Tuesday or later.

Saying that the federation was remaining strong, union organizers during Monday’s rally called for solidarity among members. They also called on the government to get involved saying that it had responsibilities to solve the problems of the shipping industry.

While repeating its calls for immediate government action and calling for a meeting with the government to discuss the social security, unemployment, and repatriation issues, the union said late on Monday t had reached an agreement on wages with the shipowners’ association. “We are not completely satisfied with the final result of the negotiations with the employers and the achievement of increases of a total of three percent, but, weighing the whole situation, we believe that it is an acceptable solution. Showing a positive spirit, we decided on the non-further escalation of our strike mobilization, which ends tonight at 24.00.”

Ferries were expected to resume service as of midnight bring to an end the 48-hour strike that lasted 96-hours.