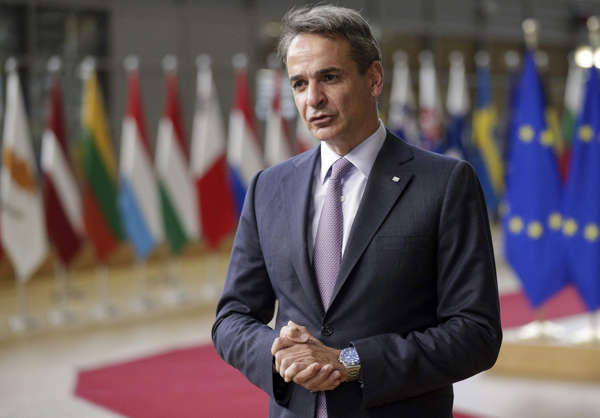 Greek Prime Minister Kyriakos Mitsotakis said his country is pushing ahead with the green transformation of its economy as it plans to become a global leader in the decarbonisation of the shipping industry.

Mr Mitsotakis, who became prime minster in July 2019 in a landslide election victory that put him in charge of the country’s first majority government in more than a decade, said Greece is focusing on sectors where it feels it can be a leader in the global climate agenda.

“Greece controls 25 per cent of global merchant shipping. They should be at the forefront of shipping decarbonisation,” he said in a seminar hosted by Confederation of British Industry president Lord Karan Bilimoria during the CBI’s annual conference.

“It’s not clear how this is going to happen, but we want to make sure that we leaders are not laggards.”

Greece is among a number of important shipping nations to back an International Chamber of Shipping proposal for a $5 billion research and development fund, the IMO Maritime Research Fund, which was first put forward in 2019 and is under discussion at a key International Maritime Organisation meeting this week.

Paid for entirely by the industry, at no cost to governments or taxpayers, the fund would accelerate the rapid increase of technology-readiness levels to ensure zero-carbon fuels can be used on large ocean-going ships – making net zero shipping by 2050 a reality.

As Greece rebounds from its second economic crisis in 20 years, the prime minister said the country is focusing on green and digital job creation, strong economic growth, sustainable tourism, and tax reform.

Mr Mitsotakis praised the UK’s handling of the recent Cop26 environment summit in Glasgow as well as the conclusions of the event.

“Cop26 was an important step in the right direction. Of course, we would have liked some countries to be more ambitious, but I fully understand the complexities of negotiating with so many stakeholders,” he said.

Mr Mitsotakis said while a lot of the focus at Cop26 was on coal, with more than 40 countries agreeing to phase out coal power, Greece made the decision to move away from the non-renewable energy source two years ago.

“We were very dependent, and still are to some extent, on lignite, which is the dirtiest form of coal,” he said, adding that it would close down all of its old lignite electricity plants by 2023.

Lignite, often referred to as brown coal, is a combustible, sedimentary brown, soft rock formed from naturally compressed peat and is considered the lowest rank of coal as its high moisture content and lower carbon content results in more carbon dioxide emissions than harder black coals.

“We will keep one [lignite plant] active, the latest until 2028, and then will use natural gas as a transition fuel and of course, aggressively move into renewables,” he said.

The Greek leader said the country is blessed with wind and sun with “a lot of room to progress when it comes to the penetration of renewables”.

“We’re looking at offshore wind, which is a topic the UK has done well on, and we’re very much looking at the UK’s regulatory framework, but also to possibly attract companies that have been active in the UK to develop our offshore wind potential,” he added.

Another area of focus Mr Mitsotakis wants to take a global lead on is the decarbonisation of the country’s small islands.

The government has launched a couple of pilot projects on two islands ”to really demonstrate that this is possible with relatively low amount of investment”.

On the island of Astypalea, for example, Greece has tied up with Volkswagen on a six-year project to transition all transport systems to electric vehicles and renewable power generation to serve as an example of climate-neutral mobility.

The island in the southern Aegean Sea, which covers an area of about 100 square kilometres and has a population of approximately 1,300, will become a carbon-free tourism destination for the 72,000 visitors that come each year.

The project, which started in the summer, will replace the island’s 1,500 cars with electric cars, install multiple charging points and introduce ride-sharing concepts.

A hybrid energy system will also replace ageing fossil-fuel based generators in a bid to cut energy costs by 25 per cent reduce CO2 emissions by 50 per cent in the first phase of the project.

“In terms of changing our tourism products, in my mind, there’s only one way for us to go and that is towards sustainability. So we’re going to be ruthless in terms of making sure that we protect our prime tourist destinations and make sure that we drive all the new investment in tourism towards sustainable tourism,” Mr Mitsotakis said.

Other green initiatives include an aggressive plastics strategy to help clean up the sea around the Greek islands and directing 25 per cent of the €32bn in loans and grants the country has available to it from the EU’s Recovery and Resilience Fund, towards green initiatives.

“For example, we have a very aggressive programme to retrofit our buildings. These are great programmes because they create lots of jobs, they support local business, they reduce the carbon footprint, but also the energy bills of households,” Mr Mitsotakis said.

He added that the soaring natural gas prices faced by Europe in recent months should spur all countries into renewables.

“If anything, we need to double down on all these initiatives and a rapid move towards renewables. They are by far the cheapest form of energy,” he said.

“And of course, any programme that reduces the energy consumption of households, in my mind is a clear winner. And there’s a lot of European money to support these programmes and make them economically attractive.”

Mr Mitsotakis said that Greece received record investment inflows into the country during 2021 after it followed “the basic playbook of how you make a country attractive to foreign investors”.

Strategies to achieve that include “significant tax cuts” to improve the business environment, simplification of licensing processes for businesses and a restructuring of the labour market that led to “the sharpest decline in unemployment during Covid, of all European countries”.

“My goal is very simple,” he said, adding that he wanted to use the expression levelling up, “which is very popular in the UK”, as the country strives to ensure it is “no longer the laggards of Europe”.

“If anything, I think we’ve demonstrated that we can be rather innovative in terms of our policies. So the message that I want to send is that the Greece of 2021 has no comparison to the past decade.“

With Greece and the UK having a strong economic partnership, with a long history of co-operation, as well as strong education and cultural links, Mr Mitsotakis wants to grow these ties by not only encouraging the UK to invest in the country but also by attracting more tourists to visit and Britons to live, work and retire in the country.

“Greece is becoming more multifaceted when it comes to its economy and business,” he added.