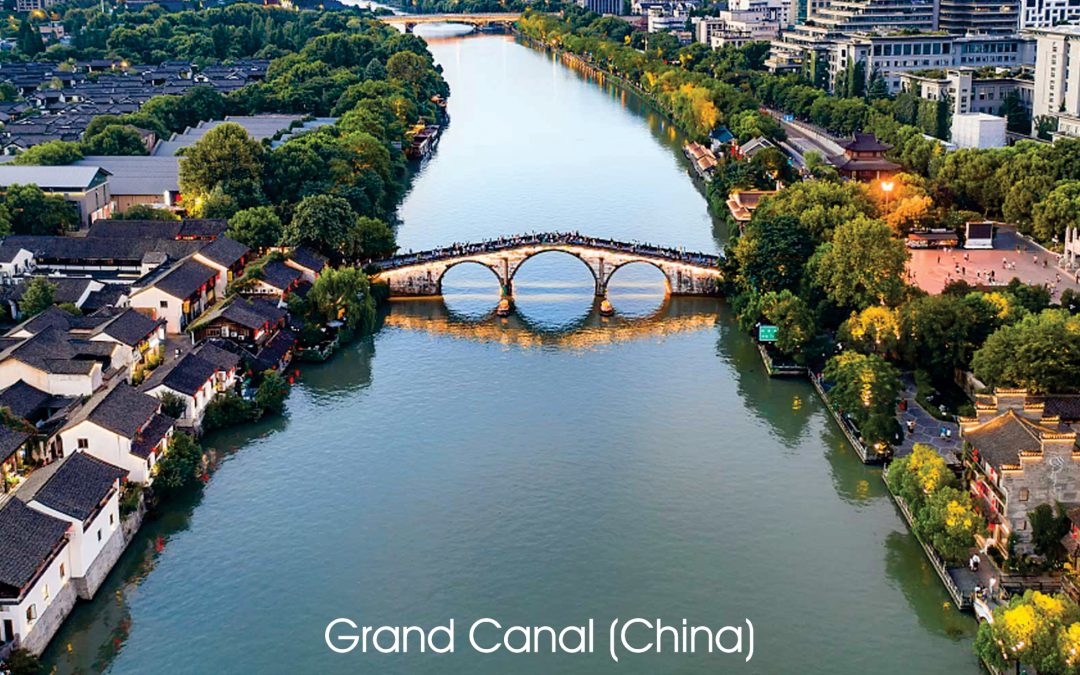 China was among the first countries to use waterway transportation and the Grand Canal, also known as the Jing–Hang Grand Canal which is a UNESCO World Heritage Site was built. It was built for Chinese regimes to transport surplus grain from the agriculturally rich Yangtze and Huai river valleys to feed the capital cities and the armies in northern China. It is also the longest manmade waterway. The canal starts at Beijing in the north and ends at Hangzhou in the south, running through Tianjin, Hebei Province, Shandong Province, Jiangsu Province and Zhejiang Province along its way. The Beijing-Hangzhou Grand Canal links five great rivers, the Hai River, the Huai River, the Yangtze River, the Yellow River and the Qiantang River.

The Ancient Chinese built canals to help with transportation and commerce. One early section was built by Kin Fuchai of Wu around 480 BC known as the was the Han Gou Canal. This canal stretched from the Yangtze River to the Huai River. Another ancient canal was the Hong Gou Canal which went from the Yellow River to the Bian River. These ancient canals became the basis for the Grand Canal over 1000 years later.

During the Sui dynasty the canal was known as Suitang Great Canal (581-618), Emperor Yang in 603 ordered to expand the canal to exert more control over the Yangtze River Delta. Thus the 1,000 kilometers (621 miles) long Yongji Canal (from the present Louyang to Beijing) in 603, the 1,000 kilometers (621 miles) long Tongji Canal (from the present Luoyang to Huai’an of Jiangsu Province) in 605 and the 400 kilometers (249 miles) long Jiangnan Canal (from the present Zhenjiang of Jiangsu Province to Hangzhou) in 610. Emperor Yang forced around 3.1 million slaves and criminals to build the canal of which 2.5 million died due to overwork and diseases. While, the previous Hangou Canal was also reformed during the Sui Dynasty (581-618), and the 1,700 kilometers (1,056 miles) long canal between Luoyang and Hanghzou was navigable, since Yangzhou had become the transportation hub between North China and South China. When the canal was finally completed, China had a new waterway that would enrich the country for hundreds of years to come. Later the Ming Dynasty rebuilt much of the canal in the early 1400s. They made the canal deeper, built new canal locks, and constructed reservoirs to regulate the water in the canal. The main purpose of the canal continued to be the transport of grain. This continued throughout the Ming Dynasty and most of the history of Ancient China. during the Qing dynasty (1644 – 1911), the canal gradually fell into disrepair, and some sections were abandoned. A major change in the course of the Yellow River in 1855 cut the Grand Canal into two sections.

After 1934 the Chinese government carried out extensive work on the canal between Huaiyin and the Yangtze; ship locks were constructed to allow medium-sized steamers, which was dredged and largely rebuilt. New work begun in 1958 to restore the whole system for the waterway to be able to carry ships of up to 600 tons. Between 1958 and 1964 it was straightened, widened, and dredged; one new section 40 miles (65 km) long was constructed, and modern locks were added. The canal can now accommodate medium-sized barge traffic throughout its length. The main traffic, however, is concentrated in the southern half. But by the first half of the 20th century, the canal was no longer functioning coherently.

The Grand Canal of China is not only the world’s oldest canal, it is also far longer than either Suez or Panama. At 1,795 kilometers (or 1,114 miles) it has 24 locks and 60 bridges. As canals need to rise from one river valley and into the next to create networks that are able to facilitate the bulk carriage of cargoes across considerable distances, the Grand Canal was the first to do this. They adjusted water levels from one terrain level to the next, the adjustable sluice gate was modified to function as a lock. The first recorded double-gate or pound lock in the world was built at the northern end of the Shan-yang Yun-Tao section between the Yangtze and Huai-yin in AD 984 by Chhiao Wei-Yo, the assistant commissioner of Transport for Huainan.

Today, the canal is about 1,700 kilometers in length and is still used in the Yangtze delta. About 100,000 river vessels transit on the canal each year, carrying about 260 million tons, mostly bricks, gravel, sand diesel and coal. Thus, the canal offers an alternative to move ponderous goods that otherwise could not be handled effectively by China’s transport system. Till date it is the cheapest areas for transportation.

With Grand Canal (China) being the last one in our series, we hope you enjoyed ‘The Series Of Canals’.